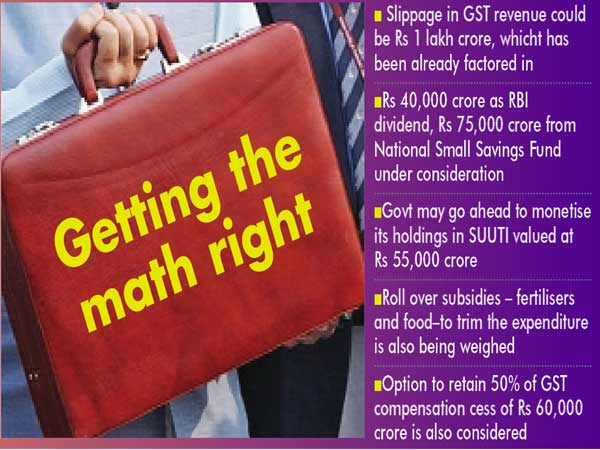 Sticking to deficit targets may still be possible notwithstanding the less-than-expected increase in direct tax revenues, shortfall in mop-up through disinvestments and about Rs 7 000 crore shortfall in monthly GST collections.

Goel may explore retaining just 50 per cent central share of unused compensation cess that was consented to during monsoon session of Parliament. Finance minister may even take GST Council on board while retaining the Centre’s share of cess on GST.

Sources said slippage in GST revenue could be a whopping Rs 1 lakh crore that has already been factored in by Goyal. Meeting targeted disinvestments and mopping up Rs 80,000 crore through stake sale in state-run companies also looks difficult given that only Rs 35,000 crore has been garnered so far.

RBI dividend worth Rs 40,000 crore and tapping Rs 75,000 crore from the National Small Savings Fund (NSSF) that has a corpus of over Rs 1 lakh crore may be considered to meet the fiscal deficit targets.

As a last resort, government will go ahead to monetise its holdings in SUUTI that’s valued at Rs 55,000 crore. Officials divulged that offloading blue chip companies stake in SUUTI can be considered to also meet the FRBM target, added officials.

With nod from the GST Council, the government also has the option to retain 50 per cent of GST compensation cess that stands at Rs 60,000 crore.

If required, Centre has the option of digging into NSSF to meet the deficit targets given that borrowings have been scaled down unilaterally during this fiscal.
Over the years, the government's dependence on NSSF has increased significantly. Last year, small savings fund bailout to Food Corporation of India, National Highway Authority of India and Air India was a humungous Rs 1 lakh crore.

As per 2018-19 budget projections, the Centre is likely to finance Rs 75,000 crore of fiscal deficit from small savings.

The government reduced its gross market borrowing by about Rs 70,000 crore and increased its draw down from small savings. Simultaneously, it cut back on bond buybacks by Rs 25,000 crore. Indications are that government could reduce the buybacks further to make up for lower gross borrowing. This implies that Centre has maximum buybacks worth Rs 46,941 crores to be done in next two months. The government had lowered its gross market borrowing to Rs 5.35 lakh crore and net borrowings to Rs 3.87 lakh crore.

Last February then finance minister Arun Jaitley had hoped to stick to the fiscal deficit of Rs 6,24,276 crore that translates to 3.3 per cent of GDP. But, during April -November 2018, the government had already run a fiscal deficit of 7,16,625 crore, or 114.8 percent of targeted fiscal deficit, raising doubts on the final deficit figures.