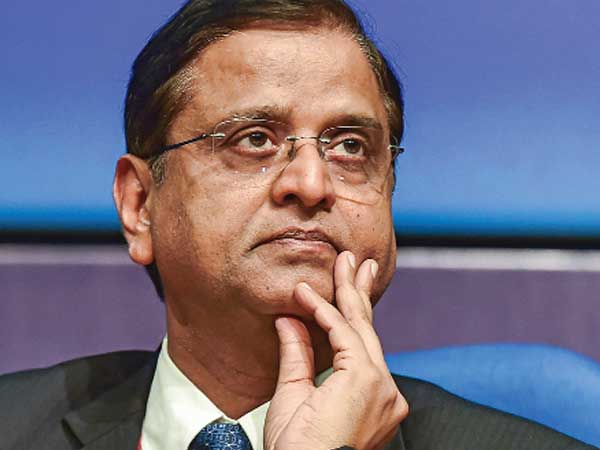 Fiscal deficit deviation is not worthy of notice: Garg

Confident of its prudent fiscal management, finance ministry is looking to end FY19 with its targeted 3.3 per cent fiscal deficit while countering the relentless criticism on the quantum of direct income support to the a farmers, asserting that the Rs 6,000 offered is an addition to the existing schemes and should not be seen in isolation.

"This (3.4 per cent fiscal deficit) is not a major deviation. I don't think this deviation worthy of notice. We are exactly on target. The real number is 3.34 per cent going up to 3.36 per cent, a negligible deviation it catches notice because 3.3 per cent looks 3.4 per cent in approximation, so there is no real increase. I do hope we end the fiscal at 3.3 per cent. The variation is just 0.02 per cent", (in pic) Subhash Chandra Garg, Secretary, Department of Economic Affairs, told Financial Chronicle in an interview.

He played down the Rs 6,000 per farmer income support being low, saying, "This is not in isolation and it is not the only thing. The entire programme of subsidised inputs like fertiliser, seed, electricity and increased interest subvention subsidy will continue as benefits to the farmers. That's one set of benefits and the second set is through MSP, which is 50 per cent above the cost of crops and more than 50 per cent in some crops whose prices were lower. So, Rs 6,000 is in addition to all these.So, it shouldn't be seen in isolation. Similar schemes may be running in two states but this is also addition to the state’s schemes, not in substitution. The government has decided to give it directly to farmers from the Centre. It's a fair amount considering the fact that it is an addiction to existing schemes".

On fiscal deficit control, Garg said the commitment to the glide path is very much there.

The glide path says we have to bring it to 3 per cent by 2020-21. We are at 3.3 per cent now and 0.3 per cent adjustment is to be done over next three years. We are confident of this. The kind of fiscal consolidation of the last four years starting from 4.5 per cent aiming to go ahead over a six-year period while keeping the expenditure running. And we have not closed the government expenditure programme because if that happens there are adverse consequences of that. Between 2009-14, the real increase in expenditure is only 2.5%. But our fiscal consolidation is one of the celebrated and very well designed programmes that follows certain path and takes care of expenditure requirements and brings structural reforms to raise revenues, Garg observed.

He also supported increased expenditure saying next year this is expected to increase by 13.5% on inflation which we expect to be 4% . So there is a 9.5% real increase which is substantial but it is deserved to be there.

The economic affairs secretary was of the view that very low inflation is not a good sign for a growing economy.

Inflation today is very low at 2.19%. Such a low inflation is also not good. Someone else faces the music because of this. Farmers are not getting the price increase. The data for last quarter of CSO's advanced estimates on agriculture, the real GVA increase and the nominal GVA increase is same at 3.8%. So there is no inflation or price rise which is also reflected in the indices. Food inflation is negative in some months. That's why this agricultural package was needed. Inflation isn't a worry at all in India at the moment in some foreseeable future.

Garg countered the view that the borrowing will increase this year and next year while referring to the Rs 1.06 lakh crore reduction overall in the borrowings.

"The fiscal deficit programme is not going up so how can borrowing increase? In some segments it may be. Overall, market borrowing is reduced by Rs 1.06 lakh crore as compared to BE since we didn't do the buyback programme of Rs 71,000 crore. We had additional Rs 50,000 crore coming from the small savings therefore draft on the market is so low. In net borrowing programme, there is an increase of Rs 30,000 crore to pay for some increase and also to build for some cash reserves. There was some shortfall in other items like postal side so just to cover up for that we needed this money which was very small and its perfectly fine. But market should be concerned with overall reduction which actually is Rs 1.06 lakh crore", he said.

The DEA secretary was confident that all these expenditure will not affect sovereign rating of India.

On Disinvestment target of Rs 80,000 crore running the risk of not being met as the current mop up is just Rs 34,000 crore, he said the current figure is better than December last year’s figure. The defined programme across all segments is going on and it can catch up the BE figure.

On government expectations from RBI to pay it handsomely on the dividend front, which as per Garg is now Rs 68,000 (Rs 40,000 crore already paid and Rs 28,000 crore dividend during the fiscal), he said. "That number is stated in Budget now and RBI board will decide depending upon what actually is the realised profits of RBI in the six months are". On the lower RE of GST, the secretary said, "The trend of GST revenues was coming through so in RE GST has been brought down, this is the realism taken note of".