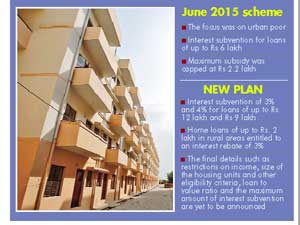 Old wine new packaging
The latest interest subvention sche?me, annou?nced by Prime Minister Narendra Modi on Saturday, is largely a polished version of a bombed scheme announced in 2015. Still, there is a degree of confidence and optimism among the realty players and housing finance companies that unlike the previous scheme, the current one would deliver the goods.
On July 25, 2015, the Centre had launched the ‘Housing for All’ scheme or the Pradhan Mantri Awas Yojana with the aim of constructing more than 2 crore houses across the length and breadth of the nation within a span of seven years. A sum of Rs 260 crore earmarked for this scheme. However, altogether only 13,250 people availed of this scheme.
This time round, the subvention size has gone up and included more than just economically weaker section (EWS) and lower income group (LIG) categories.
On December 31, the PM announced that the Centre would provide interest subvention of 3 per cent and 4 per cent for loans of up to Rs 12 lakh and Rs 9 lakh, respectively, under the PMAY, which is expected to boost low income housing in peripheral areas of urban localities across the country. The government has announced interest relief on loans up to Rs 12 lakh for homes in urban areas. In rural areas a 3 per cent subvention will be given for loans up to Rs 2 lakh to build and expand an existing house.
In the earlier scheme, the focus was on the urban poor, with loans up to Rs 6 lakh getting an interest subvention subsidy capped at Rs 2.2 lakh. However, now the government has extended the scheme and announced that housing loans in urban areas up to Rs 9 lakh and Rs 12 lakh would receive interest subsidy of 4 per cent and 3 per cent, respectively. Additionally, home loans up to Rs. 2 lakhs in rural areas are entitled to an interest rebate of 3 per cent.
With the new announcement, the government has widened the scope of the existing Credit Linked Subsidy Scheme (CLSS), which is already a part of the PMAY. The earlier loan limit was Rs 6 lakh and now the government has expanded the range and reach of that scheme.
However, final details, such as restrictions on income, size of the housing units and other eligibility criteria, loan-to-value ratio and the maximum amount of interest subvention for a customer are yet to be announced.
SBI chairman Arundhati Bhattacharya said, “It is fairly evident that the government is serious about comprehensive inclusion. Low-cost housing should witness growth in the medium to long-term.”
Private sector housing finance companies, too, echoed similar positive sentiments.
“PMAY Urban and Rural got well deserved booster through this new scheme as more number of EWS/LIG families would now come under the ambit of PMAY schemes. This announcement is particularly important as the housing sector in rural areas is also given that much required additional support. This will increase the formal credit flow to rural areas, which is expected to be utilised not only for constructing new houses but also for converting the existing kutcha houses to pucca ones and for housing related additional construction to the existing structure (improvement and extension). This demand side cushion in the form of formal credit from financial institutions will go a long way in reducing the rampant dependency on informal sources that charge exorbitant interest rates,” said Anil Sachidanand, MD & CEO, Aspire Home Finance Corporation (AHFCL), an arm of Motilal Oswal Financial Services.
While awaiting the modalities of the schemes, he hoped that going ahead, the loan amount for concession announced under PMAY Rural would be further increased from Rs 2 lakh to Rs 5 lakh so that a majority of the residential housing in rural areas gets covered. “We also wish similar positive addendum for supply side intervention schemes in the affordable housing space through public/private partnerships, which is a part of the PMAY,” he said.

Ramratthinam S, chief executive officer at Muthoot Homefin, said, “Arou-nd 90 per cent of the demand is in affordable housing while the high value property segment is the remaining 10 per cent. In addition to the existing PMAY scheme, the government has launched schemes covering loan amounts of Rs 9 lakh and Rs 12 lakh. State government’s part is critical in giving an impetus to affordable housing. Since demand for this segment is very high, builders should also be promoting more of the affordable housing projects for enough supply to be available.”
Amit Kirit Magia, MD & CEO (founder), Khush Housing Finance, on his part, said, “The PM has effectively made the EMI cheque smaller than the rent cheque for the affordable housing segment -- a tremendously positive announcement coming on the back of many directed steps to realise the ‘Housing for All’ objective. Under the government’s existing credit-linked subsidy scheme, beneficiaries of EWS and LIG seeking housing loans are eligible for an interest subsidy at the rate of 6.5 per cent for a tenure of 15 years, or during the tenure of loan, whichever is lower, on the initial Rs 6 lakh.”
Expectations are running high that along with the anticipated drop in interest rates for housing loans, the latest subsidy scheme will help millions to become eligible for home loans. end-of
Tags:
news
Latest From Politics, Plan and Policy