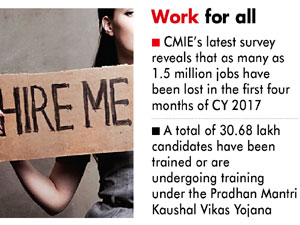 With three years of the Narendra Modi dispensation over, the pressure to deliver on the employment front is intense.

With job losses rampant, the shoe bite is acute. With CMIE’s latest survey revealing that as many as 1.5 million jobs have been lost in the first four months of CY 2017, the situation has turned alarming.

The estimated total employment during the period was 405 million compared to 406.5 million during the preceding four months, September-December 2016.

These estimates were based on consecutive Waves of CMIE’s Consumer Pyramids Household Surveys (CPHS). These are all-India household surveys over a sample size of 161,167, which included 519,285 adults. The most recent Wave was conducted over the four-month period of January through April 2017.

It was the first complete Wave, post demonetisation. The note ban began in the middle of the preceding Wave, which was conducted from September through December 2016.

Capture of the employment/unemployment status of adults began with the Wave of January-April 2016.

“We estimated the employed force at 401 million then. This grew to 403 million during May-August 2016 and then to 406.5 million in September-December 2016. Then, it fell to 405 million,” said Rajiv Pratap Rudy, minister of state for skill development and entrepreneurship.
On Wednesday, he spoke extensively on skilling and linkages with entrepreneurship and how the trajectory of the employment worm would change, admitting, however, that it would take time.

At the very kernel of the skilling programme remains the Pradhan Mantri Kaushal Vikas Yojana or PMKVY.

Rudy said, “Nearly one crore people have to be given training under the aegis of the PM Kaushal Yojana (national apprenticeship programme) for which we had to find trainers. We went to the Indian Army where almost 60,000 people retire every year. We found they have an existing eco system where the gunners, armourers and tankmen, among others, can be used as assessors and trainers by us for skilling others.

Similarly, we have been going to BSF, ITBP and the Indian Navy looking for trainers. It is a gargantuan exercise, but fortunately we have already found 8,000 to 10,000 trainers for our programmes. The change cannot be visible overnight, it is a huge exercise.”

Rudy was quick to point out that he is constantly besieged by questions like -- How many jobs have you created? To which his counter is that skilling is a tangible exercise, which requires time. The reality is that a total of 30.68 lakh candidates have been trained or are undergoing training under the Pradhan Mantri Kaushal Vikas Yojana (PMKVY) in the country as on July 6 this year.

Out of them, 1.47 lakh candidates were from Delhi while 2.46 lakh belonged to Rajasthan. The pace remains the biggest area of concern for joblessness and unemployment.

With a budget of Rs 12,000 crore under the PM Kaushal Yojana, the focus is on beefing up and bolstering Industrial Training Institutes in the states.

The idea is to reform infrastructure and revitalise the syllabus. Rudy explained: “We want to give Industrial Training Institutes CBSE-like status, so that their courses hold weightage.”

Rudy’s problem is that jobs don’t fructify overnight, but on the second anniversary of the creation of his ministry and with the PM passionately keen on delivering on the jobs front, the process is slow.