As the India Meteor ological Department (IMD) has predicted normal monsoon this year, the government is targeting yet another bumper foodgrain and horticulture production in the new crop year 2017-18 (July-June). 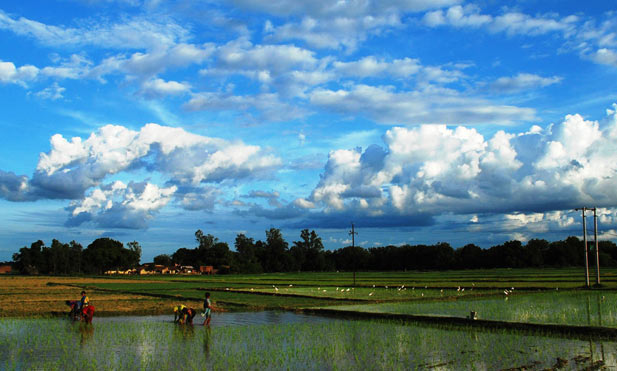 Bumper foodgrain production expected due to normal monsoon this year

As the India Meteor?ological Department (IMD) has predicted normal monsoon this year, the government is targeting yet another bumper foodgrain and horticulture production in the new crop year 2017-18 (July-June). Sowing of kharif crops like paddy, tur and soyabean have been progressing well so far.

According to agriculture secretary SK Pattanayak, no damage to crops has been reported to the Centre from states like Odisha, Assam or Haryana where there are media reports of flood affecting crops. Overall, crop area till date is higher than last year, Pattanayak said on Friday.

According to the IMD, south interior Karnataka has received 159.7 mm monsoon rainfall between June 1 and July 16 as against normal of 255.4 mm in this period. This means rainfall has been deficient by 37 per cent. Kerala too is another state which has received 25 per cent lower than normal rains this season. Vidarbha region in Maharashtra is deficient by 24 per cent and Jharkhand has got 22 per cent lower than normal monsoon rainfall.

Monsoon rain has covered almost all parts of India except a few districts in Rajasthan, Haryana and Punjab. The weather bureau is hopeful of these areas getting the monsoon showers in few days. The south-west monsoon normally covers the entire country by July 15.

Sowing in the kharif season normally begins with the onset of monsoon and picks up the pace from July, which receives the maximum quantity of rainfall in the June-September period. The area sown to cash crops — cotton and sugarcane — has risen so far, while the acreage under soyabean and tur is a little lower.

Southern parts of Karnataka, especially Dharwad and Gadag, have not received enough rains so far and the water level in reservoirs is also very low. But in other parts of the state, the situation is better and planting of kharif crops is progressing well.

The area under oilseeds such as soyabean and groundnut is down to 103.92 lakh hectares, from 115.75 lakh hectares a year earlier.

According to weather bureau data, only four out of 36 meteorological subdivisions have received deficient rains so far while other areas have received normal or excess showers. These four subdivisions, namely Jharkhand, Marathwada, south interior Karnataka and Kerala constitute 9 per cent of the country’s total area. The overall cumulative rainfall across the country is 99 per cent until July 2017.