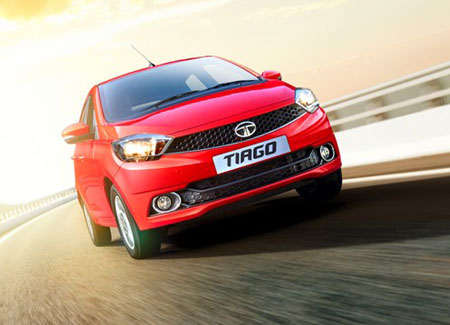 Tata Motors, India’s biggest auto maker by revenues, on Tuesday introduced a limited-edition of its successful compact hatchback Tiago and christened it Tiago Wizz to cash in on the festive season, and attract more buyers.

Usually, during the festive season, sales increase by about 20 per cent.

The Mumbai-based auto major with a turnaround strategy to revive its car business in a fiercely competitive market has added an accessory kit to make it look sportier.

Featuring a more sporty, dynamic, young and confident style, Tiago Wizz is priced at Rs 4.52 lakh for the petrol version and Rs 5.30 lakhs for the diesel version at Delhi showroom, inclusive of the accessory kit.

To provide sporty credentials to it, the car gets a striking contrast black roof and spoiler, and also unique berry-red grille highlights. The B pillar has been blacked out to make it look a bit more stylish, while the dual tone wheel cover with red accent furthers its sportiness.

The Tiago Wizz also gets dual-tone interiors with piano black finish and sporty red accent and it has also got a new patterned seat fabric as well. What also to the overall look of the car are those sleek roof rails which actually add a bit of character to the car.

This limited edition model is based on the XT variant of the standard Tiago. Hence, it gets features such as front and rear power windows, remote central locking with flip key, Harman infotainment system with Bluetooth connectivity and turn-by-turn navigation, rear parking sensors with display and Juke Car app. However, it misses out on features such as driver and passenger airbags, ABS with EBD and alloy wheels.

“With the Tiago Wizz limited-edition, we want to celebrate the success of Tiago and begin the festive season with something special for our current and potential customers,” Mayank Pareek, president, passenger cars at Tata Motors, said.

“The Tiago truly has been the ultimate game changer for Tata Motors. With robust demand since its launch, it has helped us post a month on month growth,” he said.

Additionally, the introduction of the AMT (automated manual transmission) variants brought in a new set of customers, further consolidating Tata’s position in the hatchback segment. “With nine exciting new features, the Tiago Wizz is yet another step towards making the brand more aspirational,” Pareek claimed.

The Tiago hatchback has clocked a steady growth ever since its launch in India in April last year. Tata Motors also added an AMT variant as well recently, to boost sales and bring in more customers under its fold.

Like the regular Tiago, the Wizz is equipped with drive two modes - City and Eco.

A 5-speed manual transmission is standard while a 5-speed AMT can be optioned. The Tiago Wizz can also be ordered with dual airbags and ABS.