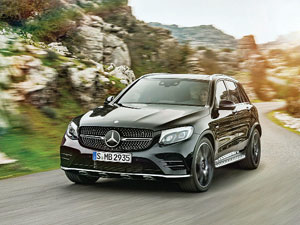 Marking the 50th anniversary of the AMG brand, which became a sub-brand of the company in the year 1967, Mercedes-Benz last week introduced the GLC 43 AMG Coupe with a price band of Rs 74.80 lakh at any showroom.

With no real competition in the Indian market yet, the Mercedes-GLC 43 AMG Coupe offers comparatively compact SUV dimensions with coupe like styling similar to what you get on the larger GLE 43 Coupe. The GLC 43 Coupe adds to 43 spec AMG lineup in India that already has the likes of the C43, GLE 43 and SLC 43.

The AMG division, which was at a mere 8,000 global units in 1991 when Mercedes-Benz took the entire stake to make it a fully integrated entity, now stands tall with sales of over 100,000 units in 2016, showcasing the significant potential for the performance brand globally. The Stuttgart-Germany headquartered major set a new sales record in 2015 by selling 70,000 AMG cars globally.

Mercedes-Benz has over 400 AMG performance centres internationally while India has five.

“Mercedes-AMG unit sales have more than tripled in the past three years, globally,” Roland Folger, managing director and CEO at Mercedes-Benz India says. An average AMG customer age is 30 years, which is seven years lesser than that of an average Mercedes-Benz car buyer, he points out.

In India, though metro markets remain key contributors to AMG sales through the five AMG Performance Centres such as Delhi, Mumbai, Bangalore, Hyderabad and Pune, the key non-metro markets are also emerging.

“Mercedes-AMG has over 50 per cent market share in India in the performance car segment,” Folger said.

He said the Pune-headquartered auto major would be opening two more AMG performance centres in Kochi and Chennai in 2017, taking the AMG Performance Centres tally to seven in India.

Since inception of AMG in 2010 in India, the brand has sold AMGs in high triple digits in the country. “Every year we have witnessed a consistent double digit growth. This for us is remarkable, considering all AMGs are imported cars,” Folger says.

With the new offering, the company has now expanded its diverse AMG portfolio in India to 10 cars. The GLC 43 AMG Coupé is also the 8th product launched by the brand in 2017 to boost sales and maintain its pole position in the fiercely competitive luxury car market in the country. Mercedes-Benz is confident of increasing its business from this performance segment in the coming years. However, one of the concerns is that the completely built units or CBUs have turned pricier by 8 per cent, after the advent of GST, while there are benefits on locally assembled vehicles.

The SUV comes standard with all-wheel-drive as the ‘4Matic’ in the name suggests and also gets air suspension as standard just like the normal non-AMG GLC does in India. The engine is mated to the 9-speed 9G-TRONIC gearbox. The GLC 43 Coupe also gets driving modes like eco, comfort, sport and sport+ that change the SUV's dynamic characteristics. The engine utilises the trademark ‘NANOSLIDE’coating on the cylinder sides, a straight lift from the company’s Formula 1 pedigree, ensuring reduced operational friction and offering slick acceleration. The interior trim includes a COMAND touch-screen infotainment system, ambient lighting and a sunroof to name a few. On-board safety kit includes adaptive braking, hill start assist, attention assist and 7-airbags.

Over 50 years ago, an overwhelming passion for motorsports translated into the creation of a unique brand called the AMG. A as in Aufrecht, M as in Melcher and G as in Grossaspach (Aufrecht’s birthplace)— the names behind these three letters are the starting point of the rapid development from a two-man operation to a global brand.
The story started in the 1960s: The two engineers Hans Werner Aufrecht and Erhard Melcher were working on the 300 SE racing engine in the Daimler-Benz Development department — until the company discontinued all motorsports activities. Yet the hearts of Aufrecht and Melcher beat unabated for motorsports. In Aufrecht’s house in Grossaspach, they spent their spare time further honing the performance of the engine. In 1965, Manfred Schiek, a colleague at Daimler, went to the start in the German Touring Car Championship with the 300 SE engine that had been developed by Aufrecht and Melcher — and won ten times! Schiek’s triumph was based on the reputation of Aufrecht and Melcher as experts for sustaining and optimising the performance of Mercedes-Benz vehicles.

However, a reputation was not enough for Aufrecht: his vision was to offer road vehicles modeled after the successful racing car. In late 1966, he left Mercedes-Benz and persuaded Melcher to venture into a shared business with him. In 1967, they founded the “Aufrecht Melcher Großaspach Ingenieurbüro, Konstruktion und Versuch zur Entwicklung von Rennmotoren” (“Aufrecht Melcher Großaspach engineering firm, design and testing for the development of racing engines"). The headquarters were a former mill in the next town over, Burgstall. Very quickly, the engines that were revamped there became a must for private racing teams.

The first milestone in terms of racing was in 1971 during the 24 Hours of Spa, which went down in the annals of the company: the AMG Mercedes 300 SEL 6.8 was the champion in its class and won second place overall. A heavy luxury sedan pulling a fast one on the competing lighter race cars — this caused a sensation, and the name AMG spread throughout the world.

Today Mercedes-AMG sports cars are made in Affalterbach town outside Stuttgart in Germany according to the "one man, one engine" principle. It was in 1984, Erhard Melcher completely independently developed a cylinder head with modern four-valve technology, the innovative engine being used as a 5.0-litre V8 in the Mercedes-Benz 500 SEC. The principle of "One Man, One Engine" was valid from the outset. At present Tobias Moers is the CEO for Mercedes-AMG globally. There are about 120 certified AMG engineers that are certified for the "one man, one engine" principle in Affalterbach. There is also one Indian engineer from Bangalore as well.