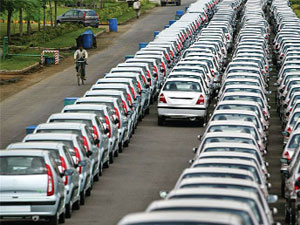 The first month of the goods and services tax (GST) has brought cheer to most car manufacturers as their sales grew in double digits in July. The reformative indirect tax regime has made cars and sports utility vehicles or SUVs cheaper by 2.5-12 per cent.

Utility vehicles continued their aggressive sales even more fiercely, thanks to a substantial 12 per cent tax reduction in GST regime, which kicked off on July 1. A 12 per cent reduction in taxation is only fuelling the Indian consumer’s penchant for SUVs. While most manufacturers did announce drastic price cuts at the onset of July, new model launches, of the likes of the Jeep Compass, have also been able to take leverage of the lower tax rate and get priced aggressively. The price cut for vehicles ranged from Rs 2,300-Rs 5,400 for entry level car and up to Rs 3 lakh for SUVs.

The domestic wholesale sales from factory gates to dealerships released by carmakers make it evident that the Indian passenger vehicle industry is in for a record sale and notch a higher gain in FY2018 than it did in FY2017, when it crossed the 3 million mark for the first time in its history.
Industry honchos said the price reduction following the successful GST rollout and good monsoon spurred vehicle sales last month. “The reduction of prices due to GST from small cars to SUVs will certainly spur sales growth and cross the 3-million historic mark cloc?ked last fiscal,” RC Bhargava, chairman of Maruti Suzuki told Financial Chronicle.

He said July numbers giv?en out by carmakers are wh?o?lesale sales from factory ga?tes to dealerships to build up the inventory at the dealerships, which were reduced in June. “We need to wait and see actual retails but the sales momentum has started well,” he said. “The benefit of good mo?nsoon, the successful rol?l?out of GST and a good run up to the festive season, sta?r?ting in August, give us confidence of continuing a robust grow?th in Q2,” said Rajan Wadh?e?ra, president, automotive se??ctor at Mahindra & Mahi?ndra, ut?i?lity vehicle specialist, said.

Wholesale sales in India from factory gate to dealerships at Maruti Suzuki, India’s biggest maker of cars by sales, rose 21.9 per cent at 1,53,298 units, up from 1,25,764 units it sold in the same month last year.

Significantly, Maruti Suz?uki, which sells one car out of two bought in the country, clocked sales growth across all vehicle segments – cars, utility vehicles and vans. The entry level duo of Alto and Wagon R sold 20.7 per cent more cars at 42,310 units, up from 35,051 units sold last year.

But sales at Hyundai Mo?t?or, India’s second largest car maker, rose 4.38 per cent at 43,007 units last month, up from 41,201 units it sold in July 2016. “Hyundai with a growth of 14.5 per cent month-on-month and 4.4 per cent year-on-year, continued its growth momentum on the strength of strong performance by the ICOTY winners Grand i10, Elite i20, Creta, with a cumulative sales milestone of 1.25 million units reaching towards higher growth momentum with strong support of lowering of prices on account of GST implementation and good monsoon which will rise customer confidence and sentiment towards vehicle buying,” Rakesh Srivastava, director, sales and marketing at Hyundai Motor India, said.

Its full-size SUV offering, the Fortuner grossed over 3,400 units, making it the best performing month since its launch in November 2016. In the MPV space, the Innova Crysta on the other hand, clocked more than 9,300 units, registering the best-ever monthly sales of the MPV across all its global markets. “We are thankful to the government for the biggest indirect tax reform of the nation, which has helped us maintain the double digit growth this month,” N. Raja, director and SVP, sales and marketing at Toyota Kirloskar Motor, said.

He said the company was able to achieve the milestone of best ever July sales.

Sales at Honda Cars Ind?ia also grew 22 per cent to 17,085 units in July, up from 14,033 units sold in the same month last year. “The post-GST price benefits, he?a?lthy monsoon and onset of festive season in many regi?ons from August will give another boost to our sales,” saidYoi?chiro Ueno, president & CEO at Honda Cars India.

“We have increased the WR-V supply for our waiting customers from last month and is reflected in the good numbers posted by the model in July,” he added.

PV sales at Tata Motors, India’s biggest vehicle maker by revenues, jumped 10.23 per cent at 14,933 units, up from 13,547 units sold last year. The strong demand came for the Tiago and the Tigor siblings.