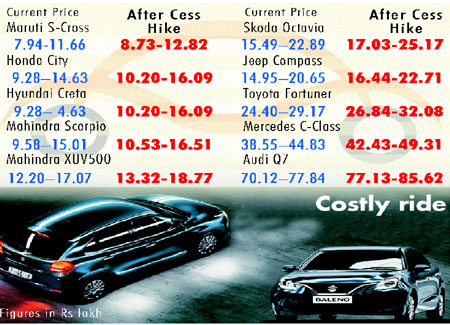 Mid-size, large cars, SUVs and luxury cars will sharply rise in the range of Rs 79,000 to Rs 1.16 lakh as the Union government on Wednesday approved a hike in goods and services tax (GST) cess on such vehicles to 25 per cent from 15 per cent. The increase in cess comes just when sales of big and luxury vehicles have started picking up in Asia’s third biggest car market.

After the hike in cess, the total tax on mid-size, large cars, SUVs and luxury cars will move from the current 43 per cent to 53 per cent.

Automakers flayed the government for its inconsistency. “This decision, contradictory to the requirement of creating a sustained demand for the luxury car in this market, would rather affect the growth momentum adversely,” Roland Folger, MD and CEO at Mercedes-Benz India, said. The automotive segment has not even settled in to see the effect of the marginal relief in terms of rationalisation of taxes in the GST regime, he said.

Folger said the auto industry attracts one of the highest rates under the GST and even without the proposed increase the luxury segment is already highly taxed, which constrains its growth.

“Now, with this proposed measure, the luxury car industry is going to decelerate. If at all it was required, a review could have been taken after six months when the outcome of GST regime would have been clearer,” he said.

The trigger for this revision is that the SUVs and luxury sedans have been the biggest beneficiaries in the new GST regime, which saw a substantial 12 per cent reduction in taxes from the 55 per cent net tax applicable in the pre-GST economic structure.

After a little over a month into the new tax regime, the GST Council in its meeting on August 5, came up with its recommendations to hike the cess on these vehicle categories. Under the original GST code, cars were to be taxed at a flat rate of 28 per cent, with an additional cess ranging from 1 to 15 per cent levied depending on vehicle category.

The revision stipulates cars and SUVs over four metres in length, and engines larger than 1,200cc (petrol) and 1,500cc (diesel) will now be levied cess to the tune of 25 per cent.

The GST Council is yet to decide on the date from when the increased cess will be applicable as well as the actual increase in cess rate. A decision is likely to be taken in the next meeting of the panel that is scheduled to be held on September 9.

Due to increase in cess, manufacturers will now be forced to reverse price cuts that were effected when GST was introduced in July

While protesting the hike, automakers had sent in their suggestions to the GST Council through the Society of Indian Automobile Manufacturers or Siam, the apex trade lobby, this increment could adversely impact sales during the festive season, which has just started.

“It is an unfortunate decision,” Society of Indian Automobile Manufacturers or Siam, an apex trade lobby, said in a statement.

Finance minister Arun Jaitley after the Cabinet meet in New Delhi said an ordinance, or an executive order, will amend the GST (Compensation to States) Act, 2017 to raise the maximum rate of cess.

Although the clearance of the ordinance is just an enabling clause for the GST Council to be able to increase the cess it is clearly evident that the government's intention is to increase the overall tax burden on many different categories of vehicles, Siam said. ”This will increase the post GST price of many vehicle categories from pre-GST level and have a negative impact on sale of such vehicle models in the market,” it added.

Lasing out at the government, Siam said this is contradictory position of the Centre. While on the one hand it has identified the automotive industry as a sunrise sector of Indian economy, on the other hand it is being treated as a demerit product, it noted.

Siam would like to underline that all the vehicles that were attracting 24 per cent or 27 per cent excise duty in pre-GST regime may potentially attract higher tax under the GST regime because of this decision.

“The hike in total tax could be as high as 10 per cent in some cases,”it urged.

They also criticised the government's hurry to implement the hike in cess, saying a review could have been taken after six months when impact of GST would have been clearer.

Rahil Ansari, head at Audi India, echoes similar sentiments, saying, “The taxes on this industry are already very high and this increase in cess rate will be detrimental to the luxury car industry as we will be forced to hike our prices to levels higher than pre-GST period.”

He asked the GST Council to “carefully evaluate the negative impact on this and, if a decision is taken on a 10 per cent cess increase, postpone the implementation for another 6-12 months to evaluate the real impact of the GST on the automobile sector, in particular the luxury segment.”

Rohit Suri, president and MD at Jaguar Land Rover India, said reduced prices after GST implementation had helped in expanding the market, which had been declining because of high taxation. Expansion in demand would have helped the industry invest more in local manufacturing and job creation across the value chain, he pointed out.

“We earnestly hope that the government and the GST Council will give due consideration to this matter and desist from raising the cess and putting a dampener on the positive momentum in demand that the industry had started to witness since July 1,” Suri said. However, Pawan Goenka, managing director at Mahindra & Mahindra, said the passing of ordinance to increase limit of cess to 25 per cent on certain class of vehicles, was along the expected lines.

Sridhar V, senior auto analyst and partner at Grant Thornton India, said the ordinance sets right the anomalies which crept in while the rates were finalised for the passenger car segment.