Introduced with an aggressive price tag of Rs 14.95'20.65 lakh, it offers six variants ' three each in diesel and petrol 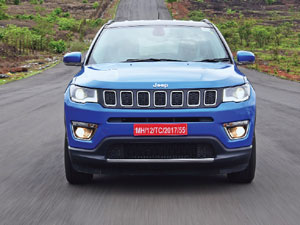 Fiat pushes for Jeep in India

Fiat Chrysler Automobiles, which struggled and failed to sell its Italian Fiat brand of cars in the fiercely competitive Asia’s third biggest car market, is now betting big on its American iconic brand Jeep with its made-in-India compact sports utility vehicle Jeep Compass in the country.

Introduced on Monday with an aggressive starting price tag of Rs 14.95 lakh at New Delhi showroom for the base Sport petrol trim, it is offered in a total of six variants–three each in diesel and petrol. The top-end diesel Limited 4x4 variant is pegged at Rs 20.65.

“Due to the overwhelming public response to the Jeep Compass, coupled with a significant number of pre-bookings and enquiries, we decided to advance the price announcement so that potential customers can finalise their purchase decisions,” Kevin Flynn, president and managing director at FCA India, said.

He said while retails will start nationwide on August 6, it will deliver petrol automatic transmission variants closer to Diwali festival.

“Analyzing our pre-bookings data it has made sense for us to prioritise the deliveries of diesel manual transmission variants,” Flynn said.

It will be a make or break model for the Mumbai-based automobile major even as the company has already sold about 4,000 units of Jeep Compass a little more than a month ahead of its launch on Monday. Online and nation-wide pre-bookings for Jeep Compass were opened on June 19. On the other hand, the Fiat brand, which had entered the Indian market many years ago, has not been selling 400 cars a month for a long time.

The Jeep brand was introduced in India last year after the top management came to the bitter conclusion that the Fiat brand could not relive its history again in India with continuous plummeting sales and at present with less than 1 per cent market share. For a long time, average Fiat sales have been less than 400 units a month, earning it the bottom position among the 14 serious car manufacturers in the country led by Maruti Suzuki and Hyundai. So, the management took a decisive ride on the Jeep brand to make its presence felt in the country. And the initial response seemed to pay.

“More than 4,000 Jeep Compass cars have been sold before the official launch in Mumbai on Monday,” dealers, and auto analysts, who did not want to be named told Financial Chronicle.

They said bookings were confirmed on down payment of Rs 50,000 for each car. That is even before knowing its price tag.

Fiat Chrysler Automobiles, the seventh largest car maker by sales, had shipped Jeep Compass demo vehicles at its 50 dealerships across 47 cities in the country last month. These were display vehicles for potential buyers.

Jeep Compass, its smallest SUV, will rival the Korean Hyundai Tucson and the German Volkswagen Tiguan on the Indian roads.

Since its entry into India in September 2016, Jeep has been working aggressively to expand its footprint in the country. The world’s renowned SUV-maker now has 50 dealerships. While a few of these are new, most are FCA’s existing Fiat dealers. The increase in outlets is mainly to cater to the expected increase in footfalls.

Jeep’s initial big offerings – the Wrangler and Grand Cherokee – are fully imported and hence exorbitantly priced, and this resulted in low customer interest.

The Ranjangoan factory, near Pune, of Fiat Chrysler Automobiles is going to act as the mother plant for the Compass SUV, for all the right-hand-drive markets out of a total hundred, slated for the product’s launch. The SUV will only be manufactured at three other locations globally, including Brazil, Mexico and China.

In fact, the first export-ready batch of Jeep Compass rolls out today, headed for the UK, Australia and Japan. FCA India is targeting a total of 8 right-hand-drive export markets. In the next few years, another 5-6 markets, mainly ASEAN, are to be to be added.

The Jeep Compass comes in a five-seat configuration and gets two engine options, including a 1.4-litre Multiair series four-cylinder turbocharged petrol, and a 2.0-litre four-cylinder Multijet-II series diesel unit from Fiat.

The new Jeep Compass, with its unique design traits, makes it immediately identifiable as a Jeep. The seven-slot grille upfront and a flat bonnet flanked by projector headlamps are instantly reminiscent of the flagship Grand Cherokee. The tyres doing duty on the SUV are 17-inches in rim size and boast a 225-section rubber patch.

The SUV comes with a Frequency Selective Damping (FSD) suspension and an all-wheel-drive system, offering sand, mud and snow modes to get across the power distributed to all four wheels, from primarily being a front-wheel-drive setup.

Inside, the SUV gets soft-touch textures for the interior plastic trims, a touch-screen infotainment system, and also an all-leather cabin in the top-of-the-line Limited 4x4 variant. It misses out on cruise control and a sunroof as even options on any of the trims.