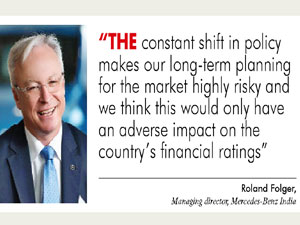 Luxury car manufacturers on Monday hit out at the government move to hike cess on large cars, sports utility vehicles (SUVs) and luxury cars to 25 per cent, saying they would be forced to re-evaluate their business plans in Asia’s third biggest car market.

German luxury car makers Mercedes-Benz, BMW and Audi and Toyota Kirloskar Motor were unanimous that the proposal to hike cess from earlier 15 per cent to 25 per cent in GST regime now was against the spirit of liberal market dynamics and would adversely impact future plans of investment and expansion under ‘Make in India’ initiative.

The car majors said increase in cess on large cars, SUVs and luxury cars, which had become cheaper (by between Rs 1 lakh and Rs 3 lakh on mass cars and up to Rs 10 lakh in luxury cars) after GST rollout would dampen the spirits of the

industry across the entire value chain.

Mercedes-Benz said the government proposal to increases taxes on luxury cars and SUVs could impact the carmaker’s expansion plans in India and hurt sales.
Mercedes-Benz, owned by Daimler, is one of the biggest luxury car sellers. The cons?t?ant shift in policy  was making long-term planning for India “highly risky,” it said.

“This decision reiterates the need for a long-term roa?d?map for the luxury car industry, which has been at the receiving end of arbitrary policies,” said Roland Folger, MD, Mercedes-Benz India. “We believe this will be a str?ong deterrent to growth of lu?xury cars,” Folger said, ad?d?ing the government sho?uld have waited for 6 mo?nths before revisiting rates.

Under GST, most vehicles are taxed at 18 per cent with an additional levy of 15 per cent on some types of cars. Mercedes-Benz, BMW, Audi, JLR and Toyota had cut prices on several luxury cars and SUVs by up to Rs 10 lakh passing on GST benefits to buyers in India.

He said if the GST rollout happens smoothly, and if benefits come in over logistics costs to firms, OEMs will not raise prices suddenly. “But they will look at prices through overall benefits of GST on pricing and take a final call to raise prices because of cess hike,” he said.

Car makers also said a co?n?stant shift in policy would only have an adverse impact on India’s financial ratings.

The finance ministry on Monday said the GST council approved a proposal to hike cess on large cars and SUVs to 25 per cent from 15 per cent. A decision on timing will be taken by the GST Council in due course.

“This decision will also reverse the positive momentum the industry wanted to achieve with the introduction of GST. With this hike in cess, we expect the volumes of the luxury industry to decelerate, thus offsetting any growth in the potential revenue generation, which cou?ld have come with the estimated volume growth,” Folger said.

Echoing the sentiment, Rahil Ansari, head at Audi In?dia, said, “We will be forc?ed to re-evaluate our business plans in light of this development. The move unfortunately is against the spirit of liberal market dynamics and we can only request to reconsider this proposal.”

This proposed increase in cess will most definitely adversely impact the sales, Ansari pointed out. “While we welcome the implementation of GST, immediate changes and fluctuations on car cess will adversely affect stability and growth of the automotive sector in India,” Vikram Pawah, president at BMW Group India, said.

He said BMW believes that long stability in tax reforms and regulations are of paramount importance to foster growth of any industry in the country. “The hike in cess is most unfortunate as it will adversely impact sales across the industry which had just starting picking up,” Shekar Viswanathan, vice-chairman and whole time director at Toyota Kirloskar Motor said.