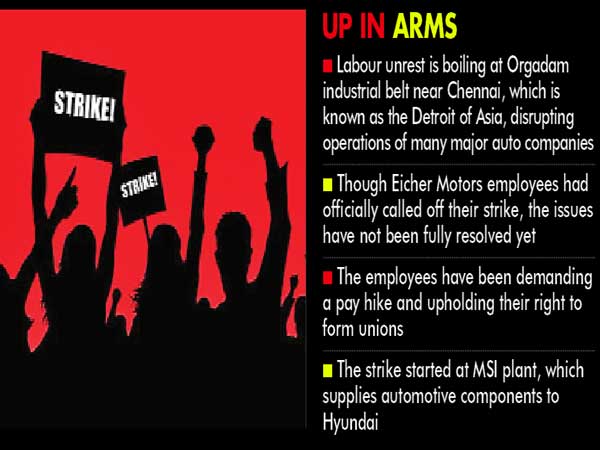 Labour unrest is boiling at Orgadam industrial belt near Chennai, which is known as the Detroit of Asia, disrupting operations of many major auto companies.

Though Eicher Motors employees had officially called off their strike, the issues have not been fully resolved yet. The employees have been demanding a pay hike and upholding their right to form unions.

The strike started at MSI plant, which supplies automotive components to Hyundai. The plant has 750 workers, of which 150 are permanent employees. According to trade union members, the employees had formed a union in the factory in November 2017 and since then the company has suspended 16 employees, of which some are office-bearers of the union. The permanent employees have been asking for an increment, which they say has not been given for 30 months. On September 6, 140 permanent employees went on a strike. A few conciliatory meetings were fixed by the Labour Commissioner but have not borne fruit.

The strike at Yamaha plant started on September 21. The employees were in the process of forming a union and were demanding bonus and other benefits. According to S Kannan, president, CITU, Kancheepuram, two employees, who had applied for leave to attend meeting with the labour commissioner, were dismissed by the management on September 20. The next day, 750 workers, of the 805 permanent employees, went on strike demanding their reinstatement.

Of the five conciliatory meetings called for by the labour commissioner, two were attended by the management representatives. “But we did not arrive at a resolution. In our absence, the company has been running the operations with the 2,000-odd contract and trainee staff. But the production has drastically come down. Instead of 2,100 vehicle units produced a day, the production came down to 200 to 300 units,” he said. On September 26, the contract staff too went on a strike after one among them was allegedly “manhandled” by the management, said Kannan. However, they returned to work the next day.

Meanwhile, the management approached the Madras High Court and the employees were asked to sit on a strike 200 metres away from the factory premises. “We are hearing that the management is planning to bring workers from Faridabad and Surajpur plants to run the factory. The management has recognised labour unions in those factories. But they are against forming one here. We have requested those unions to support us,” added Kannan.
At Eicher Motors’ Royal Enfield plant, employees went on a strike from September 24. The employees wanted contract workers to be confirmed after completing 480 days. “The management had bought in a scheme which stops contract workers from becoming permanent employees, allows management to keep wages low and fire people after serving one month’s notice,” said R Sampath, vice- president, Royal Enfiled Employees Union.

The union asked for bonus as per the stipulated norms and sought talks on wage increase. The management also has not recognised the union.

According to Sampath, all the 3,000 employees, including the contract staff, came out for the strike and the operations were fully disrupted. However, the management said that only some of the employees had not reported to work.

“Royal Enfield has always been deeply committed to maintaining respectful relationships with all employees. We believe an engaged work force and cordial industrial relations, create a culture of excellence where all employees are proud of their contributions to the organization,” the company said.

“We have forums that address matters related to the well being of workmen and are working to understand the issue that compelled a few workmen to refrain from reporting. We are hopeful of arriving at a mutually beneficial solution,” it had said a few days back. All these days, Yamaha and MSI management has not spoken to the media.

On September 27, agreeing to the labour commissioner's assurance to take up the issues with the management, the workers called off their strike and decided to return to work. However, the company declared September 28 as a holiday for “want of raw materials”. The next day they partially resumed operations.

Meanwhile, the management put up a notice asking the striking employees to give an undertaking as to they will not resort to such activities in future. The notice said employees would be allowed back upon a commitment to “consistently support plant operations”.

“We maintained that we would not give any such undertaking. Further, we feared that the trainee employees who joined the strike would be victimised by the management. We also wanted the situation at the factory to return to what it was prior to the strike,” Sampath said.

The workers received an assurance from the labour commissioner on this. He said that the company had agreed upon these demands and all of them could resume work from September 30. However on Sunday morning, when the workers came to the plant, they were not allowed to take them inside and were asked to deposit their mobile phones with the security.

“There was no such restriction prior to the strike. The management through the commissioner had ensured that the status quo will be retained. We asked the management what arrangement they had made to keep us informed if someone wanted to contact us for emergency purposes,” he said.

On Sunday, 740 permanent employees decided to abstain from work till the mobile phone issue was sorted out. Rest of the employees resumed work.