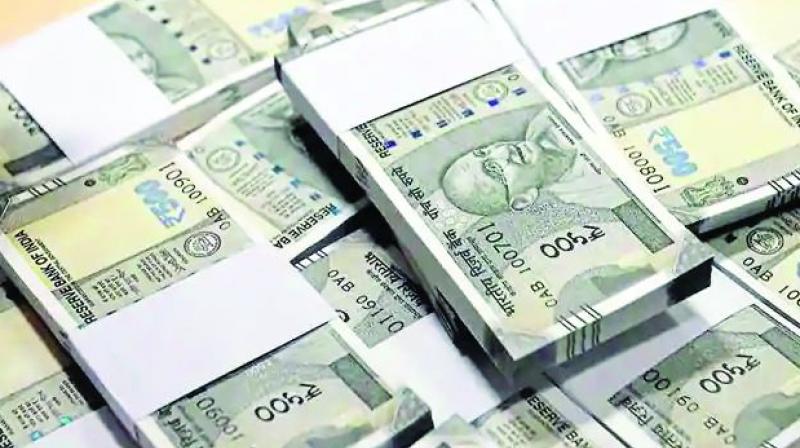 The dollar index, which gauges the greenback's strength against a basket of six currencies, rose by 0.06 per cent to 98.33.

Mumbai: The Indian rupee on Monday settled 8 paise higher at 71.66 against the US dollar amid participants hoping Reserve Bank will go for another rate cut in the ensuing RBI policy review meet this week.

Forex traders said the domestic currency opened weak as investors traded cautiously after India's Q2 GDP growth dipped to an over six-yr low of 4.5 per cent, but during the day, the local unit gathered strength anticipating further easing in key rates to boost the slowing economy.

At the interbank foreign exchange, the rupee opened weak at 71.78 a dollar but soon gathered strength to touch a high of 71.62 before finally settling at 71.66, up 8 paise over its last closing.

The Indian unit on Friday had closed at 71.74 against the US dollar.

India's GDP growth hit an over six-year low of 4.5 per cent in July-September 2019, dragged mainly by deceleration in manufacturing output and subdued farm sector activity, according to official data released on Friday.

"This week, market participants will be keeping an eye on RBI Policy statement and could consider cutting rates for sixth time this year. We expect the USDINR(Spot) to quote in the range 71.70 and 72.20," Somaiyaa added.

Bankers and experts believe the Reserve Bank may cut interest rates for the sixth straight time on December 5 to support growth that has continued to slip.

The RBI has cut interest rates on every single occasion the monetary policy committee (MPC) has met since Shaktikanta Das took over as the Governor in last December.

The dollar index, which gauges the greenback's strength against a basket of six currencies, rose by 0.06 per cent to 98.33.

The 10-year government bond yield was at 6.49 per cent in morning trade. PTI