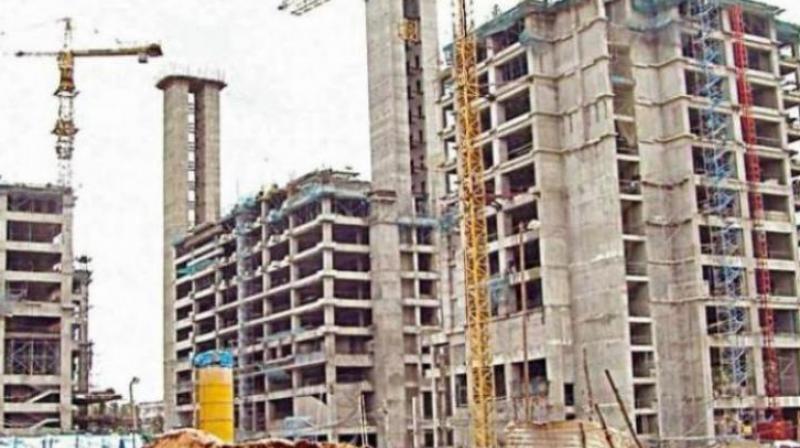 In the north, property prices in Delhi, the National Capital Region (NCR), and Mumbai were forecast to be stagnant in 2020. (Representational Image)

Bengaluru: India’s housing market, burdened with unfinished projects as developers struggle to get cash, is forecast to rebound modestly over the coming year on government plans to unclog the market, a Reuters poll of analysts found.

While the government said the fund would help revive more than 1,600 moribund housing projects, that may not be enough.

“Whether the announced fund will suffice to unfetter all this inventory is a big question mark. Financing options, including banks and non-banking financial companies, have dried out and investors prefer commercial real estate,” said Anuj Puri, chairman of ANAROCK Property Consultants, based in Mumbai.

“However, the approved funds can rescue lakhs (thousands) of homebuyers who have invested in stuck projects.”

But a majority of analysts in the poll, 11 of 15, said the fund would be sufficient to ‘significantly boost’ demand.

Thirteen of 16 respondents who answered another question also said India’s housing market activity was more likely to rebound than slow further over the coming year.

The November 6-19 Reuters poll forecast average national prices would rise 3.0 per cent next year and 4.3 per cent in 2021, an upgrade from 2.0 per cent and 3.5 per cent predicted three months ago.

While those were the most optimistic calls since polling began for those periods, it would be a weak rebound for a sector that was clocking double-digit annual house price growth before the government ban on high-value cash notes in late 2016.

The Indian real estate sector, which has been hit by a severe liquidity crunch over the past three years following a series of debt defaults by high profile non-banking finance companies, is yet to completely recover from that shock ban.

“We expect the liquidity crisis will continue to impact more players going forward as well,” said Rohan Sharma, head of research at Cushman & Wakefield India, based in Delhi.

“Many developers who are stuck, or awaiting further tranches of agreed-upon funds from lenders, could face working capital issues which could lead to more stress in the market.”

House prices in the southern cities of Bengaluru and Chennai were expected to rise around 2 per cent over the next two years. In the north, property prices in Delhi, the National Capital Region (NCR), and Mumbai were forecast to be stagnant in 2020.

Despite easy monetary and fiscal policy, the economy slowed to a six-year low of 5% growth during the April-June quarter compared with the same period a year earlier. Recent business surveys suggest there is no recovery lurking around the corner.

The Reserve Bank of India has slashed interest rates by a cumulative 135 basis points this year to 5.15 per cent, making it the world’s most aggressively easing major central bank. Policymakers are expected to cut the repo rate again in December.

But 75% of analysts who responded to a separate question said further rate cuts would not significantly stimulate housing market activity and prices. Relatively low rates have also created their own problem.

“With extensive financialisation of real estate, the market has now become inefficient because the money was chasing its own return rather than producing more affordable housing and creating demand,” said Pankaj Kapoor, managing director at Liases Foras, based in Mumbai.

“Because of that, everything now has become unaffordable and even if builders want to reduce prices, they don’t have a margin to do that.”

On an affordability scale of 1 to 10, where 1 is extremely cheap and 10 extremely expensive, Bengaluru and Chennai were rated 6, the National Capital Region (NCR) 7, Delhi was rated 8 and Mumbai was at a maximum 10.