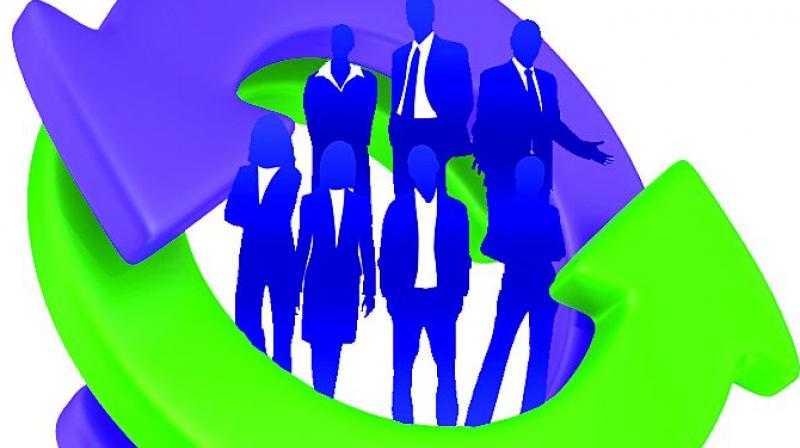 Mumbai: The employment growth in the country has slowed down in the last two years, to 3.9 per cent in 2017-18 and 2.8 per cent in 2018-19 as the core industries have witnessed virtually, a negative growth in hiring, according to a study.

The study is based on a set of 1,938 companies spread across all sectors.

The study revealed that aggregate headcount increased at 3.3 per cent annually between 2014-15 and 2018-19, that is over a four-year period.

Ideally, it observed that the rate of growth in employment should link with growth in gross domestic product (GDP), which is the broadest indicator of economic growth.

However, employment growth has not been commensurate with GDP growth with a difference of 4.2 per cent in CAGR during this period.

The top 10 sectors covering 895 companies with employment of 4.70 million in 2018-19 accounted for three fourth of the total employment of the sample companies.

Of this 42.4 per cent employment share was from three service industries while the balance was from manufacturing (30 per cent) and agriculture (3 per cent).

Overall the share of employment in services is around 50 per cent, it added.

Sector-wise, the study revealed that the core industries have witnessed virtually negative growth in headcount, with crude oil just about maintaining the employment level.

These industries have been impacted by the slowdown in GDP growth as well as the challenges on the NPA side for banks.

A similar picture is witnessed for the heavy industries where growth has tended to be negative for power and capital goods and just 0.4 per cent for infra.

However, the consumer-oriented industries showed a varied pattern, like in the agricultural and durable goods there has been a deceleration in employment while there has been an increase for FMCG and textiles albeit at a lower than sample average of 3.3 per cent.

Two sectors have witnessed negative growth, that is paper and gems and jewellery, while chemicals recorded growth of just 1.6 per cent.

Healthcare and automobiles have registered a healthy growth of 4.8 per cent in employment, which is quite impressive.

Meanwhile, the financial sector's performance has by far been most impressive with banks, NBFCs and insurance witnessing impressive growth.

The highest growth was in the NBFC segment, which has added more from 2016-17 onwards as the sector also witnessed sharp growth in business.

In the non-financial sector segment, the IT and retail industries have registered near or above-average growth.

However, telecom, hospitality and realty witnessed negative growth reflecting the state of the industry.

The telecom industry has been through upheavals which have led to several mergers that have impacted headcount.