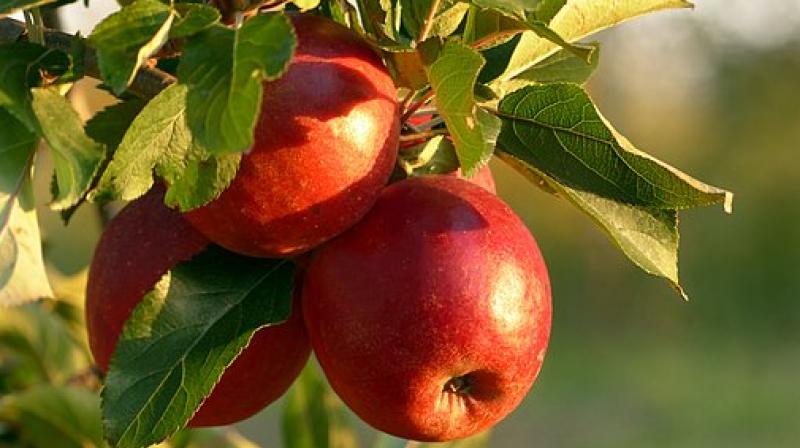 The Centre decided to procure apples in the region in the wake of terrorists threatening some apple growers not to sell their produce in the market. (Photo: Pixabay)

New Delhi: The Centre's initiative to procure apples in Kashmir through cooperative Nafed has "failed miserably" as only 0.01 per cent (1.36 lakh boxes) of 11 crore boxes has been purchased directly from growers so far, a farmers body claimed on Saturday.

Returning from a field visit to the valley, the All India Kisan Sangharsh Coordination Committee (AIKSCC) demanded that the Centre should provide compensation to apple and other horticulture crops growers in Kashmir who have incurred losses due to unseasonal heavy snowfall as well as from lack of transport and cold storage assistance due to the political turmoil in the newly formed union territory.

The Centre decided to procure apples in the region in the wake of terrorists threatening some apple growers not to sell their produce in the market following abrogation of the special status given to Jammu and Kashmir under Article 370 and bifurcation of the state into two Union Territories.

"The government authorised Nafed to carry-out procurement but this operation failed miserably. Lack of experience and infrastructure meant that NAFED has procured 0.01 per cent of the estimated produce (1.36 lakh boxes out of more than 11 crore boxes)," the AIKSCC said in a statement.

Farmers have complained that the Nafed procurement had disruptive effect since it has sold apple in the sale market at lower prices that brought down the wholesale apple prices in the procurement market, it noted.

Kashmir produces 75 per cent of the country's total apple production and the horticulture industry of Kashmir has a turnover of Rs 10,000 crore annually.

"If 70 per cent loss (as is being claimed by the growers and representatives of commerce and industry) is true, then this will devastate the livelihood of the people of Kashmir for years to come," the farmers' body said.

Highlighting the plight of farmers, the AIKSCC said its delegation which visited the valley witnessed extensive damage to the apple crop in the valley due to untimely and heavy snowfall, it said and added growers were unable to move out and harvest the crop and store it because of heavy snow fall.

The impact on saffron crop was much worse and yields are expected to remain lower this year.

"Surprisingly, the Kashmir administration has not declared it a calamity, nor has it initiated any field level survey so far to estimate the extent of damages," it said noting that regular supply of electricity, road connectivity and supply of essential items in villages also are major issues of concern.

Besides heavy snowfall, the farmers body said crops like pear, cherry and grapes which were harvested in August were stranded due to complete shutdown in the valley and could not be marketed, leading to near total loss for the farmers.

Apple harvesting was to begin in September but was delayed as farmers could not go out for picking. Once harvesting began, non-availability of telephones for first 60 days and non-access to internet even now meant that the communication between apple growers, transporters and traders was snapped, causing a disruption in the demand-supply chain, it said.

Further, farmers could not bring apples to the procurement markets since trucks were not allowed to go to the villages and farmers were forced to bring their produce to the Highways. This caused delays, inconvenience and additional costs, it added.

As a result, transport cost almost doubled due to prevailing security threat and unavailability of trucks. Frequent transport blockades and closure of highways resulted in further delays and loss of quantity and quality of apples during transportation, the AIKSCC noted.

AIKSCC, a nationwide platform of 250 farmers' organisations, urged the government to assess the actual loss and provide relief to apple growers as well as growers of saffron, pear, grape, cherry and sheep breeders.

It also demanded that the government to declare the current apple crisis in the valley as a natural calamity eligible for central assistance. It further sought the government to write off the loans of affected farmers and in the meanwhile reschedule the Kisan Credit Card (KCC) loans and extend long term interest free loan to all apple and other fruit growers.

"Farmers who attended the meetings with AIKSCC delegation have expressed their concern that if not assisted by the authorities, peasant suicides may happen in the valley due to economic hardship," the AIKSCC added.