Government is targeting to roll out 'One Nation, One Ration Card' across the country by June 1, 2020. 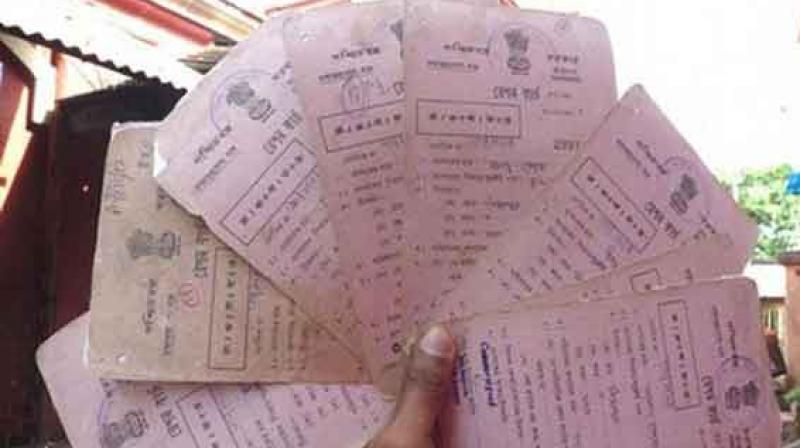 The FCI godowns have been made online and the states have been directed to make their depots online at the earliest to track the movement of foodgrains. (Photo: PTI)

New Delhi: In a bid to implement 'One Nation, One Ration Card' across the country by June 1, 2020, the Centre on Friday kick-started inter-state portability of ration card between Telangana-Andhra Pradesh as well as Maharashtra-Gujarat.

This means beneficiaries living in Telangana and Andhra Pradesh can buy their quota of ration from the Public Distribution System (PDS), also called ration shops, in either of the state. Similar would be the case in Maharasthra and Gujarat.

In these four states, both intra-state and inter-state portability of ration card is being implemented successfully, he said.

Meanwhile, seven states -- Haryana, Jharkhand, Karnataka, Kerala, Punjab, Rajasthan and Tripura -- at present are testing intra-portability of ration card, which means beneficiaries can lift their quota of ration from any PDS located within a state.

Elaborating, Food Secretary Ravi Kant said gradually, the inter-state portability of ration card will be implemented in the above mentioned states by January 2020.

"By January 2020, these 11 states will be formed as one grid where ration card will be made portable. It means beneficiaries can buy ration from any one of these 11 states," Kant explained.

The Minister said that the government is targeting to roll out 'One Nation, One Ration Card' across the country by June 1, 2020.

Asked how the stock will be managed, Paswan said,"there won't be any problem because the Food Corporation of India (FCI) godowns have enough capacity and have been asked to stock three months of ration in advance."

The FCI godowns have been made online and the states have been directed to make their depots online at the earliest to track the movement of foodgrains.

The Minister also directed the Food Ministry officials to make random visit to test that inter-state portability is working properly.

At present, the government supplies 5 kg of subsidised foodgrains to each person per month to over 81 crore people via 5,00,000 ration shops in the country, costing the exchequer about Rs 1.4 lakh crore annually.

Foodgrains via ration shops are supplied at a highly subsidised rate of Rs 3/kg for rice, Rs 2/kg for wheat and Rs 1/kg for coarse grains via PDS as per the National Food Security Act (NFSA).