Under the PM-KMY a monthly pension of Rs 3,000 will be provided to eligible farmers. 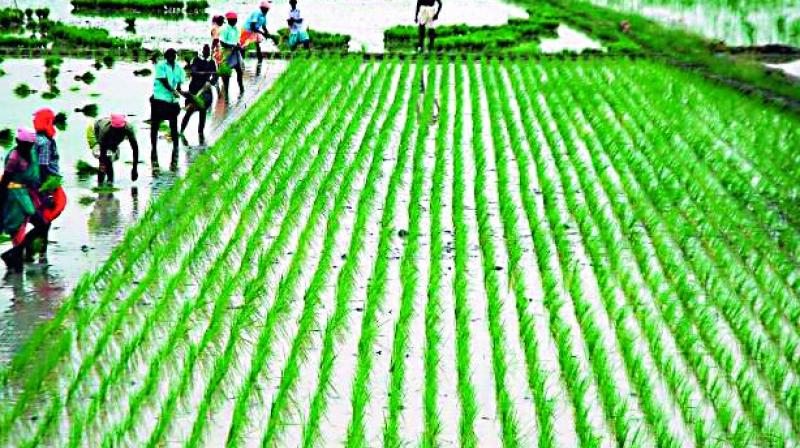 The scheme will be implemented across the country, including Jammu and Kashmir and Ladakh, he said. (Photo: DC)

New Delhi: The Centre on Friday started registration for the Pradhan Mantri Kisan Maan-Dhan Yojana (PM-KMY), a pension scheme for farmers announced in the Union Budget.

Under the PM-KMY, which was announced during the Budget 2019-20, a monthly pension of Rs 3,000 will be provided to eligible farmers on attaining the age of 60.

"Today, the PM-KMY registration process has commenced across the country. Till noon, 418 farmers have registered and I request more farmers to join the scheme," Agriculture Minister Narendra Singh Tomar said announcing the launch of the scheme.

The scheme will be implemented across the country, including Jammu and Kashmir and Ladakh, he said.

"Despite working hard, farmers does not earn enough. Therefore ensuring social security is important. We have taken several measures to ensure better income and the PM-KMY is yet another effort towards this direction," Tomar said.

The minister further said the government is aiming to double farmers' income in the next five years. The Centre is in constant touch with states and making efforts to ensure all key schemes reach the farmers, he said.

"After government came to power, the Prime Minister asked each ministry to implement key programmes in the first 100 days. The launch of PM-KMY registration process is a step towards that direction," the minister said.

Farmers holding up to 2 (rpt) 2 hectare farm land will be eligible for the PM-KMY scheme. It is a voluntary and contribution-based pension scheme for farmers in the age group of 18 to 40 years, he said adding the scheme is meant for small farmers and therefore there is a landholding limit.

The initial enrolment to the PM-KMY is being done through the Common Service Centres (CSCs).

The enrollment is free of cost, the Minister said and added that the CSCs will charge Rs 30 per enrollment which will be borne by the government.

The Minister said the farmers will have to make a monthly contribution of Rs 55 to Rs 200 depending on the age of entry, in the pension fund till they reach the retirement date.

The Central government will also make an equal contribution of the same amount in the pension fund, he added.

Highlighting the key features of the scheme, the Minister said the spouse is also eligible to get a separate pension of Rs 3,000 upon making separate contribution to the fund.

In case of death of the farmer before the retirement date, the spouse may continue with the scheme.

If the farmer dies after the retirement date, the spouse will receive 50 per cent of the pension as family pension. After the death of both the farmer and spouse, the accumulated corpus will be credited back to the pension fund.

The beneficiaries may opt voluntarily to exit the scheme after a minimum period of five years of regular contributions. On exit, their entire contribution will be returned by pension fund manager Life Insurance Corporation (LIC) with an interest equivalent to prevailing saving bank rates.

The Minister further said that the farmers, who are also beneficiaries of the PM-KISAN scheme, will have the option to allow their contribution debited from the benefit of that scheme directly.

In case of default in making regular contributions, the beneficiaries are allowed to regularise the contribution by paying the outstanding dues, along with prescribed interest.

There will be an appropriate grievance redressal mechanism of LIC, banks and the government. An empowered committee of secretaries has also been constituted for monitoring, review and amendment of the scheme, the minister added.