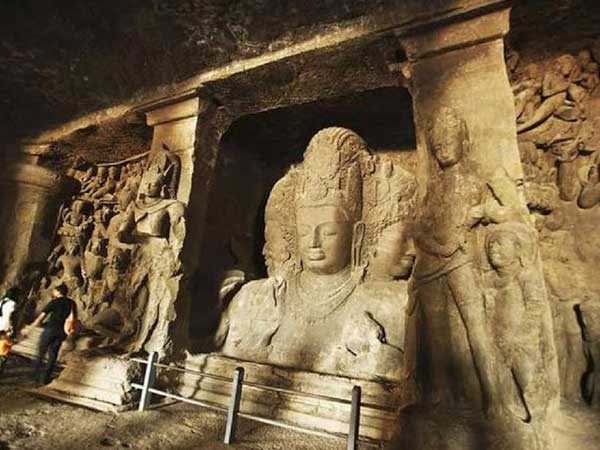 A Visit to the Elephanta Caves

Seeing the famous Elephanta Caves is often on the list of many visitors to Mumbai. However, the effort of having to take an hour long ferry ride from the Gateway of India, often ends with this visit being shifted down the list and often cancelled altogether. The trip to Elephanta can also be rather formidable for elderly history visitors anxious to see the caves. Reaching the jetty, a visitor has to walk up 120 steep steps from the shore beach to reach the main cave. For them there is however, a tourist toy train for those who prefer not to walk.

I also fell into this bracket, till I decided enough was enough and finally after umpteen visits to the city, set off to see the island of Gharpuri (City of Caves) and the caves known as Elephanta—named after the sculpture of an elephant that was found there. This interesting sculpture is now housed in Mumbai’s oldest Museum, the Dr. Bhau Daji Lad Museum, earlier known as the Victoria and Albert Museum. This bit of information made me rush post haste to see this important sculpture.

The Elephanta Caves are one of UNESCO’s World Heritage Sites. This unique collection of cave temples is predominantly dedicated to Shiva. Gharpuri, 10 km to the east of Mumbai offers visitors five caves that essentially dedicated to Shiva as well as two Buddhist caves and stupa mounds that in all probability, date back to 2nd Century BC.

The ferry trip presently priced at Rs 200, has multiplied over the years, but then so has the comfort level of the mini-ships that take visitors from the Gateway of India to the island of Gharpuri. Needless to say most of the year round, there is no dearth of local citizens, who enjoy the trip as a holiday getaway. Groups of young people on picnics and large numbers of pilgrims may also be seen on most trips on the ferry.

The Shiva temple is an amazing creation—hewn from solid basalt rock, the caves offer some of the finest stone-hewn images of Shiva. Unfortunately, except for a few exceptions much of the artwork is defaced and damaged. The carvings within the caves, are based on Hindu mythology and among the most famous images is the large monolithic 20 feet ‘Maheshmurti’—a splendid ‘Trimurti’ (three-faced Shiva) facing the entrance, considered one of the masterpieces of Indian sculpture. The three heads represent three essential aspects of Shiva: creation, protection, and destruction. Then there is the image of the dancing Shiva as ‘Nataraj’ (King of dance) and ‘Yogishvara’ (Lord of Yoga).

Architecturally, the main cave can be considered a marvel, dug out of sheer rock.  At the main entrance of the caves there are four pillars, with three open porticoes and an aisle at the back. Each row has six pillars that divide the hall into a series of smaller chambers. The roof of the hall is said to have concealed rock-cut beams that are supported by massive stone pillars. As you step inside you find, that the temple enclosed has interior walls but no exterior wall. The pillars create the space and also support the weight of the hill above.

Embedded within the ‘Great Cave’ are dedicated shrines, the largest of which is the Linga shrine, a square ‘Garba–griha’(womb) with four entrances, located in the main hall. Steps lead from the four doorways into the sanctum, which has a lingam in what is considered a ‘Mulavigraha’ style. Each doorway is guarded by an enormous ‘Dwarpala’ on each side—a total of eight Dwarapalas, their height spanning floor to the ceiling. These are said to have been badly damaged when the Portuguese ceded control of this region to the British. As in other temples, the Linga shrine is surrounded by a circumambulation path.

Almost as if fused is another open temple—located north-south of the main temple which has the three faced Trimurti as its focal centre. The northern entrance to the cave is flanked by two panels of Shiva dated to the Gupta period both damaged. The left panel depicts Yogishwara (Shiva as the Lord of Yoga) whileon the right is Nataraj (Shiva as the King or Lord of Dance). The Trimurti is flanked by two large friezes, one of Ardhanarishvara and the other of Gangadhara. Standing east of the Trimurti is the damaged four-armed Ardhanarishvara. This image, which is 16.8 ft in height, represents the ancient Hindu concept of essential interdependence of the feminine and the masculine aspects in the universe. One half shows Shiva with male characteristics and Parvati in the other half as a female. Smaller shrines are located at the east and west ends of the caves. The eastern side of this sanctuary appears to have been a ceremonial entrance,

Surprisingly, the history of this island is unknown in either Hindu or Buddhist records. It appears that the island had a rich past - suggested by Archeological studies having discovered evidence of human settlement by possibly the 2nd century BC.

Coins dating to the 4th century have also been found on the island. Regional history appears to have also been recorded during the Gupta Empire era, but these particular caves have not been clearly mentioned.

This makes the origins and the century in which the Elephanta caves were built, a subject of mystery and a historic dispute till today.