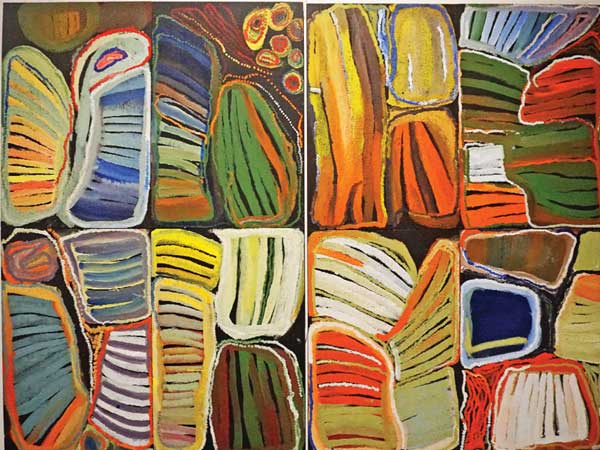 Being aware of the cosmic abstract and its importance in religion is nothing new. In fact, it would be unfair to say abstract art is a new phenomenon. The use of abstract in art has been in vogue in early civilisations and medieval ages. Except, we call it tribal art. If one were to compare Lord Jagannath’s idol with modern day cubism, one can perceive a strange connect, albeit that may bear no semblance with the contemporary cult and yet express the forms in clear details, feel experts.

As contemporary art gathers impressions of abstract forms, new meanings evolve through what was painted say 60,000 years ago. One can surely track the connection even in 21st century, explains Dr Adwait Gadanayak, director general at the National Gallery of Modern Art (NGMA). “When we feel an attachment to our roots, especially in art and culture, we can perceive the manifold progress in the society. You can feel how they have imagined the whole form and what art means for every mood of nature as well as the artist who painted it painstakingly,” he says.

NGMA is hosting Indigenous Australia, a exhibitions of aboriginal art expressed through a contemporary perception.

As curators Wally Caruana and Franchesca Cubillo say: “English is incapable of describing our relation to the land of our ancestors. We decided to describe in a way we hoped non-aboriginal people would understand through pictures. If they won’t listen to our words, they might try to understand our paintings.”

Many of these paintings are etched on bark and depict images through expressive use of points and dots. However, it is pertinent to mention that these paintings bear no resemblance to pointillism – a technique started by French artist Georges-Pierre Seurat and Paul Signac in 1886, branching from impressionism, where distinct dots of colours are applied in patterns to form an image. In fact, most of these paintings depict a much older style that influenced the lives of the aborigines of Australia.

As Gadanayak recalls, “They never used the term for a technique or a movement but they knew everything about the lines, colours and dots, they would use. Every painting tells a story. When we were installing the art, a sudden dust storm swayed in. There was a piece of art – Wandjina by Alec Mingelmanganu - depicting God of rain and cloud. The curator informed us that whatever we show in the form of art affects the atmosphere. So we decided to display the painting in one corner, lest it provokes a storm again.”

He brings in a simile with Indian Gond and Warli paintings where one can well perceive the mood and feelings of the artist – if there is love, anger happiness or hatred. “The aboriginal artist has his pride and self respect and this has been expressed through these paintings,” he adds.

The Wandjina are cloud and rain spirits from Australian aboriginal mythology that are depicted prominently through rock art. Some of the artworks in the Kimberley region of Western Australia dates back approximately 4,000 years ago.

It is believed that the second half of 20th century witnessed a revolution in Australian art when paintings and sculptures of aborigines finally got a recognition as art and not as artefact.

Aboriginal art is all about the land, made of materials gathered from the land, etched into its surface as rock engravings or ceremonial ground designs and painted onto the body of the people who inhabit the country often depicted in the form of a spiritual entity, packed with symbolic meaning and totemic associations that is fundamentally religious in nature.

Legends have it that ‘Dreaming’ is an aboriginal cosmology and relates to the genesis of the universe, the creation period when the ancestors established the laws of nature, science, religion and society.

In 1788 about 250 distinct languages were spoken, across the continent, each with its own set of traditions, kingship rules, laws, belief systems, and styles of art. The indigenous artists represented at the show come from specific regional blocs – Arnhem Land with its environs in the Northern Territory; the Western Deserts and the Kimberley and Western Australia. In late 19th century Mickey of Ulladulla, William Barak and Tommy McRae many others hailing from eastern western and southern seaboards created art with the impressions of a changing world, where their ancestors were subject to colonialism and violence. Their artist descendants comment on their contemporary world bringing alive the past practices, the “indigenous realities that slipped through the cracks left by the histories written by the dominant society.”

In fact, many artists have used their works to reveal the injustice of the past - the invasion and denial of aboriginal sovereignty, dispossession of land and removal of aboriginal children from their families and communities that culturally sustained them.

It is an eye-opening show where one can get a feel of the contemporary Australian artists who have aptly connected to their roots and brought out the reflections of a bygone era through their art.