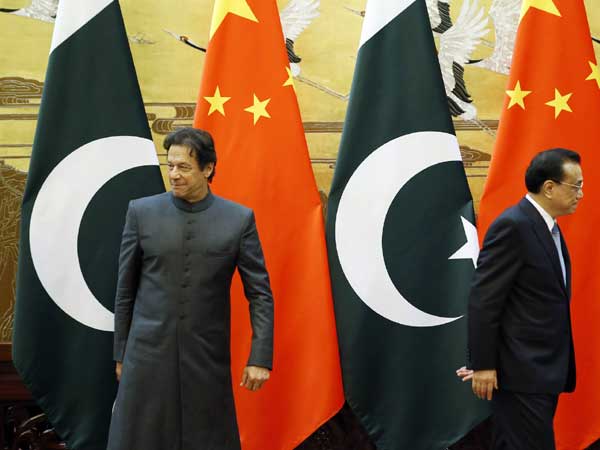 Last week saw Pakistan reaching out to every conceivable friend for bailout assistance. It was also seen unable to control radical elements, which overpowered the government decision-making and the judiciary in the Asia Bibi’s case, as well as providing big relief to some militant organisations like JuD and FIF to operate freely. Imran Khan is in China to nod to everything what Chinese say as head of a debt-ridden country after criticising the China-Pakistan Economic Corridor (CPEC) for long and threatening to review the same till he was elected. Surely he would have realised that it’s not easy to head a pseudo democratic government, under the shadow of its army, ISI and radicalised elements in Pakistan, a country that is in financial chaos and needs some oxygen in terms of the dollar to breathe. CPEC has pushed the Khan government’s external debt to $76.3 billion. His domestic debt has increased to Rs 17,483 billion. As per State Bank of Pakistan report, the total debt in 2018 stands at 78.4 per cent of GDP. With foreign reserve dipping to approximately $8 billion, what he has got from Saudi Arabia is meager $3 billion BoP support for one year and one-year deferred payment facility for import of oil up to $3 billion is peanuts given the magnitude of crisis. He would have gone to China mentally prepared to mortgage anything to get a similar bailout package.

China knows that despite its help Pakistan will have to go to IMF for another bailout (13th time). China may not be comfortable with the kind of transparency being demanded by them including the details of debt to China. It may also not be keen to be pulled into the middle-east cauldron, rivalry between Saudi Arabia and Iran or the Shia-Sunni divide. China itself is struggling with trade war and poor returns on investment in BRI. Since the launch of the CPEC in 2015, power generation and infrastructure projects in Pakistan worth $28 billion have either been completed or proceeded to advanced stages of construction. China will like to have assurance of Khan about smooth development of the project, because he has slashed $12 billion, reducing CPEC to be $50 billion project from planned $62 billion, and ordered an audit of the same. Despite Imran’s anxiety and optics of wiping out corruption by selling Mercedes fleet, Chinese will like to wait for any big ticket announcement till they are sure about security of their project, 30,000 workers, security personals, and future of his honeymoon with Pakistani army, ISI, and militant groups.

It can also be argued that to avoid IMF scrutiny China may be little more liberal with debt aid package to keep Pakistan afloat minus IMF loan, if possible. There can also be some quid pro quo in keeping the US out of this strategic space, some land grab (with earlier precedence of ceding Saksham Valley to China) or mortgaging some other sovereign rights.

The Supreme Court decision to acquit Christian woman Asia Bibi in a blasphemy case, created an Islamic rhetoric and mass protests by radicalised elements. Militant groups like Tehereek-i-Labaik Pakistan (TLP) and others including Hafiz Saeed outfits, were out challenging the government machinery, Supreme Court and law and order machinery, despite a personal warning by Khan. It indicates mass radicalisation. Radical elements forced the government to an extent that it had to strike a deal with them, not to allow her to fly out by putting her on the exit control list (ECL). The militant groups like Jammat-ud-Dawa (JuD) and Falah-I Insaniniyat (FIF) have been taken off from the list of banned outfits. Many terror organisations operating in Pakistan are beyond their control as well. The assassination of Maulana Samiul Haq, chief of his own faction of the Jamiat Ulema-i-Islam also called as “the Father of Taliban”, and many others justify the same. The financial action task force (FATF) last month also expressed dissatisfaction over any worthwhile control over terror funding. The support of Pakistan army and ISI to well developed terror support infrastructure to pursue proxy war against India and Afghanistan is unlikely to be weakened due to their flawed narrative of ‘India Threat Theory’ to legitimise holding strings of power in their hand to protect their people, irrespective of the cost being paid in terms of economic and social needs of the country. That there has been further increase in defence expenditure and Pakistan aspires to be the fourth-largest nuclear power in the world, indicates that its military will not allow the government to muddle with its plans irrespective of the concern whether the public gets bread or otherwise.

The Asia Bibi case gives an impression that Pakistan is in the dangerous path of Islamic radicalisation, which can lead itself into a semi-caliphate, if percentage of radicalisation in Pakistani army increases. But there is a catch. An unstable failed Pakistan is not in global interest, nor in the interest of China as well as India, because it will take no time in getting converted into largest jihadist caliphate, should majority of Pakistani army radicalise, which no outsider wants, more so when it’s a nuclear state. It is the biggest harbor of terrorists in the world, and doesn’t seem to be inclined for any change in status quo. It has been kept financially afloat in past by the US, because of these reasons and its strategic location, which was crucial to them at that point of time. Now for similar reasons and getting warm water access to its western region, China may have every reason to keep it financially afloat.

Pakistan’s other friends may also help directly or indirectly to pursue their own specific agenda like Saudi Arabia may be happy to promote its Sunni ideology in competition with Shia ideology of next door neighbour Iran. Russia too may be keen to sell weapons, hence may not help financially, but in terms of military hardware. With the kind of Chinese investments and manpower involved, it may not be an exaggeration to say that it may lead Pakistan to be a future Chinese colony. For the time being China and other interested parties will not let Pakistan sink. From the Indian point of view neither the proxy war, nor terror funding, nor terrorist activities across the border going to be affected even if FATF declares Pakistan grey/black as there are many others who would like to make the best of crisis in Pakistan.