Economy lost the verve and slipped to five-year low of 5.8 per cent in the March quarter. 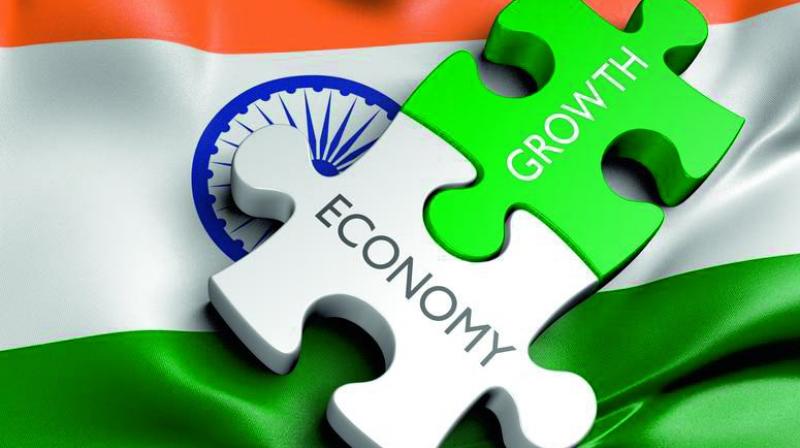 Reserve Bank has cut its key rates thrice by a cumulative 0.75 per cent to a nine-year low of 5.75 per cent.

Mumbai: Despite the policymakers' efforts to revive the sagging growth momentum, the economy is set to print in a 5.7 per cent uptick in the June quarter and is likely to bottom out from there, a brokerage has said.

The slowdown will be led by consumption and services, it said, attributing the same to the ongoing crisis among the shadow banks which have been funding the consumption drive before liquidity crisis hit them hard since last September, coupled with the weakening global growth and the resultant demand slump.

The brokerage, however, said the industry and investment indicators are relatively stable.

"We believe GDP is yet to bottom, and expect it to further moderate to 5.7 per cent in the June quarter, further down from 5.8 percent in March quarter," the note said.

Growth momentum is likely to pick up in the September quarter to 6.4 per cent, which will go further to 6.7 per cent in the three months after that, Nomura said, citing the data from its proprietary tools.

"We will watch coming dataprints to see whether they confirm or negate the sustainability of the turnaround in the growth cycle," it said.

It can be noted that the economy lost the verve and slipped to five-year low of 5.8 per cent in the March quarter, thereby pulling down the overall GDP growth to a mutli-year low of 6.8 per cent, even as policymakers have been setting ambitious targets like making the country a USD 5-trillion economy by 2025 which will entail an annual growth of 8 per cent during these years.

Addressing the concerns on the growth front, the Reserve Bank has cut its key rates thrice by a cumulative 0.75 per cent to a nine-year low of 5.75 per cent between February and June and is set to slash again next week seizing on the opportunity provided by a cooling inflation.

However, banks are yet to pass on the entire quantum of these cuts to their borrowers due to a time taken in transmission. SBI's move to cut deposit rates sharply announced Monday, may fasten the transmission finally.