Growth can come back. Because of a lot of (reforms), economy is in transition, said SBI chief Rajnish Kumar. 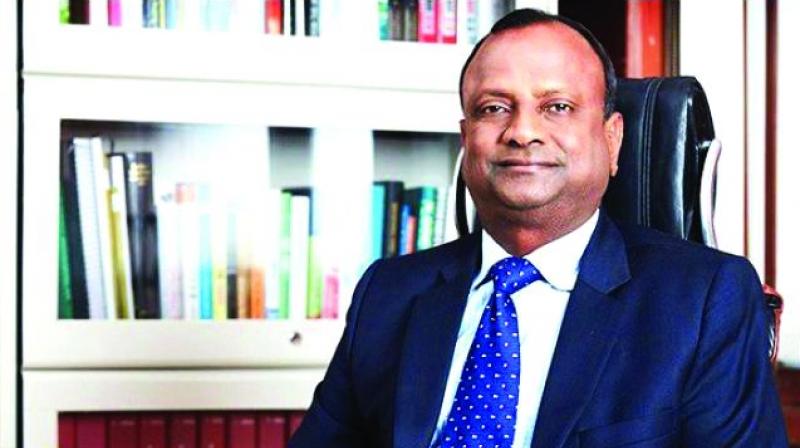 We had GST (goods and services tax). We had IBC (insolvency and bankruptcy code). All these reforms have been implemented in last three years. And as a result, we are in a transition period. A lot of cleanup has happened in the corporate sector, said SBI Chairman Rajnish Kumar. (Photo: File)

Washington: The Indian economy is in a transition phase largely owing to important reforms undertaken in the last few years, a top Indian banker has said exuding confidence that the country's growth rate will be back on track.

"Growth can come back. Because of a lot of (reforms), economy is in transition. We had GST (goods and services tax). We had IBC (insolvency and bankruptcy code). All these reforms have been implemented in last three years. And as a result, we are in a transition period. A lot of cleanup has happened in the corporate sector,? State Bank of India (SBI) Chairman Rajnish Kumar told PTI in an interview.

Kumar, 61, was in Washington last week as part of the Indian delegation led by Union Finance Minister Nirmala Sitharaman to attend the annual meetings of the World Bank and the International Monetary Fund.

"When there is transition, I think, some disruption always happens," he said.

Kumar further said in terms of development, India is still not in the "developed" category. Besides, the per capita income is still low. There is huge scope for growth in India, and demographics is also not against India.

Unlike many other developed countries where they are facing challenges on account of demographics, India does not have that kind of challenge at least for the time being, he said.

"And that is where the growth can come back," the top Indian banker said.

?So, in my view we are seeing the bottom as far as economic growth is concerned. Now it will go up... because sector by sector, if we look at agriculture I'm finding this year position is better even in terms of credit, manufacturing is slow and private sector investment in infrastructure is slow,? he said.

Observing that the Modi government over the past few years has brought banking to the doorsteps of every household, Kumar said the activation of these accounts have reached almost 90 per cent. Besides, balances of these accounts are now reaching a level where servicing these accounts is ?not a loss-making proposition? for the banks, he noted.

"Average balance in these accounts is touching Rs 1,900, about Rs 230 billion in June was the balance in the savings bank account,? he said, adding that there is benefit to the economy when one is able to bring such a large population under the banking channels.

Noting that the biggest challenge in the banking sector was about the functioning of the public sector banks, Kumar said recapitalisation has happened in a big way but sectoral issues need to be addressed like the power, road and telecom sectors.

"These sectoral issues impact the working of the banks, particularly on the asset quality front," he said.

He further said that in this government there is no political interference in the banking sector. "State Bank of India has been more immune to any pressures because the systems are such that it is very difficult for any Chairman, any MD to influence any decision-making process,? he said.

When asked about cryptocurrency, which has been banned in India, the SBI chairman said the way the world is moving towards digitisation, at some stage, a regulated cryptocurrency would be a better bet than an unregulated one.

?Let's see. Because there's a dark side of the internet also. There can be misuse of the digital currencies. That is why regulation is must,? he said adding that efforts are on how to bring technologies like blockchain into functioning of the banks.