The crisis started with the introduction of GST and became acute with the slowdown. 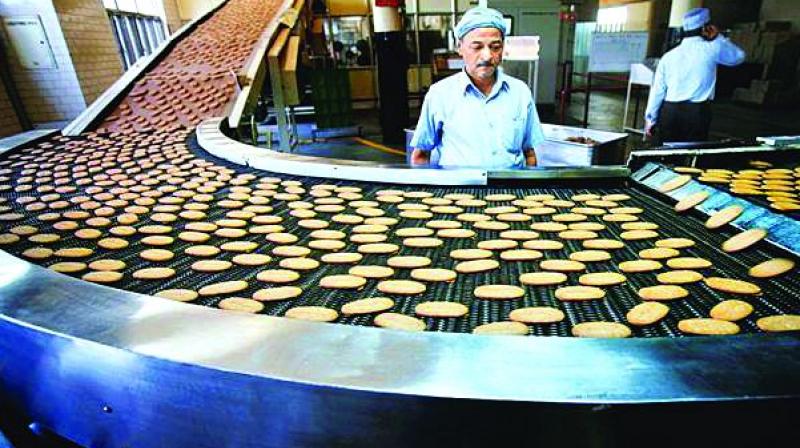 Earlier, biscuits priced below Rs 100 per kg were exempted from the excise duty. Hence, low priced biscuits had to pay 14% tax, and the rest 22% to 24%.

Chennai: The slowdown in the economy has reached one of the most defensive sectors—fast moving consumer goods. Leading biscuit-maker Parle has on Wednesday announced plans to lay-off as many as 10,000 people over the next one year.

Parle employs about one lakh people, including direct and contract workers, across 10 company-owned facilities and 125 third-party manufacturing plants.

“In the past seven to eight months, our sales growth has come down from 11 to 12 per cent to 2.5 per cent. As a natural outcome, we will have to cut our production by 8 to 10 per cent and this will see 8,000 to 10,000 people going out of job,” Mayank Shah, Category Head, Parle Products, told Financial Chronicle.

According to him, the crisis started with the introduction of GST and became acute with the current slowdown.Under the earlier tax regime, biscuits priced below Rs 100 per kg were exempted from the excise duty. Hence, low priced biscuits had to pay 14 per cent tax, while those priced above Rs 100 were taxed 22 to 24 per cent. Under GST, the rates were rationalised to 18 per cent, thus, taxing the lower priced biscuits more by 4 per cent and the higher priced ones less by 4 to 6 per cent.

“We made several representations to the government, and the government also in-principle agreed to our point that those articles which were exempted from excise duty should be treated accordingly under GST. We have been waiting for the government to take action on this for the past one-and-a-half years. However nothing has happened yet,” he said.

Parle had absorbed the higher taxes and suffered losses in the hope that the GST rates will be lowered. Seven to eight months back, Parle went for a price hike in products priced below Rs 100 per kg.

“We had expected a dip in demand, but what we did not expect was the slow down. The double-blow saw the demand falling by 7 to 8 per cent,” added Shah.

Biscuits priced below Rs 100 account for 35 per cent of Parle’s sales and 25 per cent of the total industry sales. These biscuits are largely consumed by the rural markets.

The slowdown has hit the entire biscuit market as well, though not to the extent of Parle. Biscuits priced above Rs 100 too have witnessed growth coming down from 18 -20 per cent to 8-9 per cent.

Shah is hopeful that the government will take steps to revive the general demand and also the demand in the low-priced biscuits by bringing down the taxes to 5 per cent.

The lay-off plan in FMCG sector has created quite a stir across industries. “Automotives started hitting the panic button a few weeks ago. In the recent past, FMCG players have followed the trend. Soon enough, we will see white goods, logistics, entertainment, hospitality and other services getting impacted,” said Aditya Narayan Mishra– Director and CEO of CIEL HR Services.

Candidate community hasn’t yet started the panic in a large-scale. However, it will be percolating down soon in the next three-four months unless we see corrective actions to boost consumption,” he added.