Deliverymen stand by to transport the goods anywhere within a 1.9-mile radius in 30 minutes. 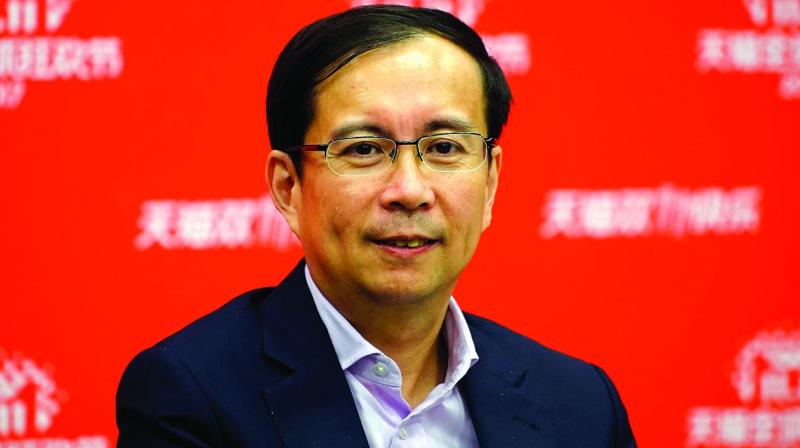 For months, Daniel Zhang huddled with a small team in an underground garage in Shanghai. The chief executive of Alibaba Group Holding Ltd. was working on a secret plan that would sound crazy even to many of his own colleagues 100 miles away in Hangzhou. Zhang wanted to launch a startup inside the e-commerce giant that would combine a grocery store, a restaurant, and a delivery app, using robotics and facial recognition to speed up logistics and payment.

That project, Freshippo, has since become a major part of Zhang’s blueprint for Alibaba’s future, with 150 stores (and counting) across 17 Chinese cities. On a recent weekday afternoon at a store in Hang-zhou, plastic bins shuttle automatically along tracks in the ceiling, collecting goods from around the store for online orders. Deliverymen stand by to transport the goods anywhere within a 1.9-mile radius in 30 minutes.

Zhang is the little-known 47-year-old with the unenviable task of stepping into the shoes of China’s most famous businessman. On Sept. 10 he’ll add the title of chairman at Alibaba after assuming the CEO role in 2015, and he’ll be the first person since co-founder Jack Ma to hold both positions at the same time. Ma is a global figure known for hobnobbing with heads of state and for his fiery speeches at gatherings such as the World Economic Forum. Zhang is slight and soft-spoken, often proceeding haltingly in English during calls with investors. Even in China, he’s unknown. At Alibaba headquarters, an employee’s parent mistook him for the janitor.

Yet in his understated way, Zhang is proving as radical as his predecessor. He says Alibaba is uniquely positioned to pull together the online and offline worlds in groceries and beyond, and dozens of his new initiatives are leading Alibaba deeper into fields including finance, health care, movies, and music. Especially in the US, where the company’s shares trade, these efforts have baffled some investors, who worry about overreach. In Zhang’s view, they’re a matter of survival. “Every business has a life cycle,” he says during an exclusive interview at Alibaba’s Hangzhou headquarters. “If we don’t kill our existing business, someone else will. So I’d rather see our own new businesses kill our existing business.”

Alibaba’s online marketplace made it China’s largest public company, with a market value of about $460 billion, but recent months have provided several signs of strain. China’s economic growth is slowing, squeezing consumer spending and advertising. Investors have pushed down the company’s share price. And protests in Hong Kong forced the delay of a stock offering that could have raised $20 billion. “He’s got to find new seeds for revenue growth,” says Mitchell Green, managing partner of Alibaba investor Lead Edge Capital. “He’s planting a lot of seeds.”

Born and raised in Shanghai, Zhang followed the path of his accountant father to Shanghai University of Finance and Economics. Early in his career, he saw up close how quickly established institutions can vanish. He was interviewing at Barings Bank when one trader lost more than $1 billion and took the 233-year-old institution under. Instead, he became an auditor at the Chinese affiliate of Arthur Andersen, and was working in the satellite office when Andersen went down in connection with the Enron accounting-fraud scandal.

“This is a very funny story,” he says, with the comic timing of a man who loves bookkeeping jokes. “After I joined Arthur Andersen, I had a joke with him. I said, ‘For many years, you didn’t want me to be an accountant. Then I became an auditor.’ I was never an accountant for even one day.”

Zhang later became chief financial officer at game developer Shanda Interactive, at the time the largest internet company in China. That’s where Alibaba Vice Chairman Joseph Tsai, the next-most influential co-founder after Ma, found Zhang in 2007. “Daniel really understands business,” says Tsai, who recently plunked down $3.5 billion, about a third of his wealth, to buy control of the Brooklyn Nets. “You can’t disrupt unless you really understand what you’re trying to disrupt.”