As many as 3.50 lakh jobs have reportedly been lost in the auto industry since the start of the fiscal. 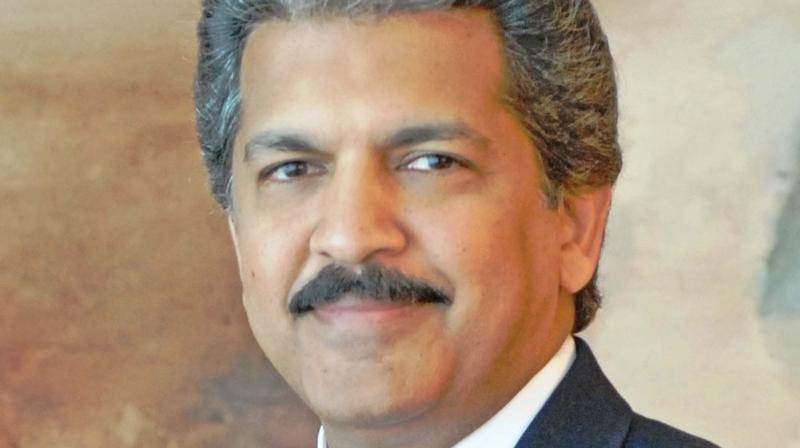 I do believe that kick-starting the auto industry with a few short-term measures will serve a greater national purpose, said Mahindra group chairman Anand Mahindra addressing the company's shareholders at its 73rd AGM. (Photo: File)

Mumbai: Pitching for a lower GST or a rollback of the cess to pull the automobile industry out of the slowdown, M&M group chairman Anand Mahindra on Wednesday said that a revival of the industry would have a ripple effect on the entire economy.

The domestic auto industry has been in the throes of crisis for almost one year now as the sales are falling month after month, forcing manufacturers to temporarily shut factories and laying of workers.

As many as 3.50 lakh jobs have reportedly been lost in the auto industry since the start of the fiscal.

"I do believe that kick-starting the auto industry with a few short-term measures will serve a greater national purpose," said Mahindra addressing the company's shareholders at its 73rd AGM here.

Along with long-term measures, the short-term measures also required that would remove the immediate barriers to making autos affordable, he said.

"The most obvious and welcome first aid would be some temporary relief on the GST front, either by modifying the slabs, or, if that is not possible, by removing the cess," Mahindra said.

Another suggestion would be a re-look at the registration fees which have gone up very substantially and a rollback of the increases in road tax mandated by state governments after the introduction of GST, he said.

"I am hopeful that these few actions along with the traditional post-monsoon revival will set us back on track and positively impact the economy," Mahindra stated.

The revival of employment would lead to a revival of consumption and in a virtuous cycle that would get us closer to the 5-trillion economy that is our common goal," Mahindra said.

On the resource side, he said, we need support for both wholesale and retail financing, and where all the right steps are being taken.

"The rate cuts necessary for revival have been put in place and the future look brighter for our stressed NBFCs. I am confident that these measures will bear fruit, creating greater liquidity for NBFCs which will ultimately make its way into the hands of the consumer," he said.

"I appeal lenders to take a more supportive approach to the suppliers and dealers, who are the backbone of the auto ecosystem," he said.

The auto sector in almost every country is a key driver of the economy, with a huge multiplier effect, he said adding India is no different.

In India, it constitutes 7.1 per cent of the GDP, and 49 per cent of the manufacturing GDP. Inclusive of its value chain, it supports almost 37 million jobs and its ecosystem runs wide and deep.

Stating that short term measures are required to catalyse consumption, Mahindra said the governments hesitancy in looking at GST concessions can be understood.

"The auto industry contributes revenues of upwards of Rs 180,000 crore to government treasuries. The paradox is that while the government needs to be lauded for its fiscal responsibility, the current slowdown in the auto industry poses a greater threat to the financial arithmetic," he said.

According to SIAM estimates, he said, the slowdown has resulted in an 8 per cent loss in GST collection in the first six months the current year, adding just to catch up with the FY19 GST collections, the auto industry will need to grow at a rate of at least seven percent in the remaining eight months of the current fiscal.