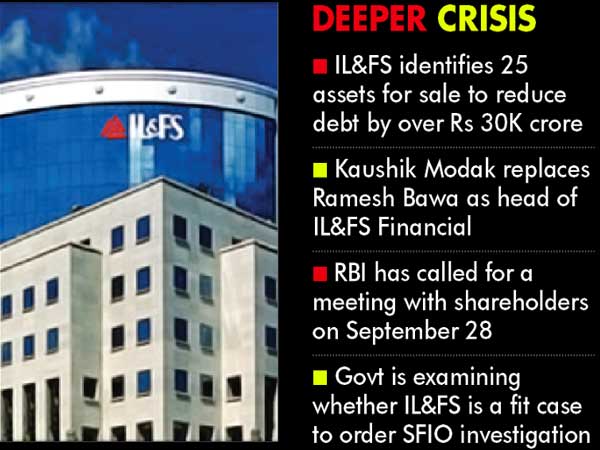 As heavily indebted IL&FS and its group companies head towards bankruptcy, lenders have raised the issue with major shareholders, including LIC. Sources said a few lenders have already taken up the matter with LIC, Orix Corporation of Japan and Abu Dhabi Investment Authority — the largest shareholders in IL&FS — and they are waiting for their nod before insolvency proceedings could be initiated.

Meanwhile, the ministry of corporate affairs is examining whether IL&FS is fit case to order SFIO investigation as well. It is also expected that all these issues, including the rating agencies’ sudden downgrading of the company and group entities, will be discussed in its forthcoming annual general meeting (AGM) on September 29.

The Reserve Bank of India (RBI) has also called for a meeting with shareholders on September 28 to discuss on a capital infusion plan. The RBI is also expected to make its own observations about the defaults.

A senior official of a public sector bank told FC, “The current buzz on LIC’s backing on the IL&FS debt mess did not impress us at all. As our consolidated debt is at stake, a consortium of lenders is expected to be formed soon to take on this company in this regard.”

According to a report by Nomura India, IL&FS has a consolidated debt of over Rs 91,000, over 50 per cent of which is owed mostly to state-run banks. But lenders differed, saying that the loan amount to be paid by the company and group entities is much more than what Nomura has estimated so far.
A banking source said, “Out of Rs 91,000 crore, IL&FS and group firms owe to PSU banks only to the tune of total debt of over Rs 57,000 crore as of now. We don’t see any possible link of the management with lenders in the near future in this regard.”

Fearing the piled-up loans to turn into non-performing assets (NPAs), the lenders are likely to take prompt and immediate action against the group and associates.

“Moreover, we will soon write to corporate affairs, finance ministry, SFIO and related agencies on this issue. As our money pending with IL&FS & group entities, we, therefore, seek an immediate relief from the group. We are waiting for their next AGM this month-end and then we will take further course of action,” he said.

IL&FS has very strong shareholding communities, where LIC has a major stake of 25.34 per cent at the end of March 18. Despite debt cloud all over financial circles, the corporation is confident that it will keep the company out of the financial mess.

When asked what would be the status of LIC if IL&FS comes under insolvency process, a senior official of the insurance behemoth strongly denied the fact: “We don’t let IL&FS and group entities go under IBC process. As we have longstanding relationship with the company for years, we will find some way out soon. We have already started our first initiative in this issue and we will take it forward in the future too.”

Meanwhile, the cash-strapped infra major announced a series of measures to deal with the crisis at IL&FS. The company has identified around 25 assets for sale and expects to reduce debt by over Rs 30,000 crore. Besides, it rejigged its top management where Ramesh Bawa, head of IL&FS Financial (IFIN) resigned and Kaushik Modak replaced him as CEO. The rejig came after this newspaper first reported last week that the company might see a major reshuffle on the top.

The IL&FS board had also recently approved a Rs 4,500 crore rights issue, which is expected to be completed by October 30, along with recapitalisation of group companies to the extent of Rs 5,000 crore in IL&FS Financial Services, IL&FS Transportation (ITNL), IL&FS Energy, IL&FS Environment, and, IL&FS Education.

IL&FS sources said, “In the forthcoming AGM, the company’s other shareholders — Orix Corporation of Japan (23.5 per cent) and Abu Dhabi Investment Authority (12.56 per cent), HDFC (9.02 per cent), State Bank of India (6.4 per cent) and minor shareholder Central Bank of India — are all believed to have asked IL&FS for a turnaround plan, including plans to monetise assets to raise funds. After the AGM, all these partners, from October onwards, are also expected to decide whether they will extend further support to the cash-strapped firm or not.”

Besides, the board may seek shareholders’ approval to increase the authorised share capital from Rs 1,500 crore to Rs 1,600 crore and the paid-up equity capital from 40 crore shares to 50 crore shares. “In addition, the board proposes to raise the borrowing limits from Rs 25,000 crore to Rs 35,000 crore as well as approve the audited consolidated financial statement for 2017-18,” the source said.