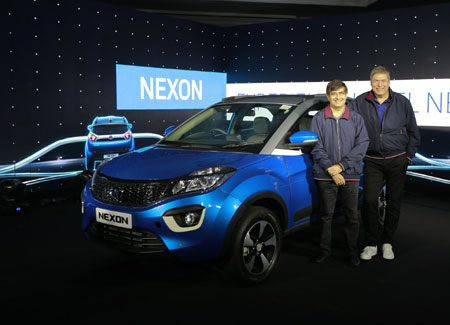 Tata Motors, India’s largest automobile major by revenues, on Thursday launched its much-awaited compact sports utility vehicle Nexon. The auto major, which is aiming at number three slot in the country after Maruti Suzuki and Hyundai, has priced the car, with petrol and diesel options, between Rs 5.85 lakh and Rs 9.45 lakh at New Delhi showroom.

Brezza does not have a petrol variant but the company is planning to launch one soon. The other competitors include Hyundai Creta, Renault Duster and Mahindra TUV 300.

In what is described as a ‘make or break product for Tata Motors’, bookings for the compact SUV had begun some time ago at its 650 authorised dealers for an amount of Rs 11,000 and deliveries will begin this month.

The compact SUV is powered by a new 110hp, 1.5-litre diesel engine and a 110hp, 1.2-litre petrol motor. Both engines have been launched with six-speed manual gearboxes, a six-speed automatic transmission (AMT) for the diesel and a five-speed AMT for the petrol model will arrive at a later date.

The Mumbai-based auto major offers plenty of kit on the Nexon, with even the base variant getting dual front airbags, ABS with EBD, reach and rake steering adjust, multiple drive modes like Eco, City, Sport, umbrella holders in the doors and a folding rear seat. Arguably, the Nexon is the first in its class in the country to feature multiple drive modes for both engines options.

In addition to the standard features, the top-spec XZ+ trim gets an 8-speaker, 6.5-inch touchscreen Harman infotainment system with Android Auto and voice commands for the automatic climate control.

Targeted at the personal car buyers, Nexon is the fourth product based on the Tata Motors ‘Impact Design’ philosophy, claiming to bring together global and contemporary design with advance technology and features to woo the demanding buyers.

“Our passenger vehicle market is dynamic. The fast-moving generation has clear preferences in terms of design and style. Catering to this discerning need of our customers, we have consistently pushed the boundaries of automotive engineering by creating new categories of vehicles. The Tata Nexon is the result of our intent to break away from the conventional approach of segmentation in its discreet forms and fulfilling a larger set of milieus,” Guenter Butschek, CEO and managing director at Tata Motors, said.

Unlike Tata Tiago and Tigor, launched in a matured and crowded space, the Nexon is entering a segment that is at a very early stage of evolution.

This, Tata Motors expects, would help the company grow with the market. Butschek said the Nexon model would address 71 per cent of the car market from the present 59 per cent, which its other models covered in India’s growing passenger car market.

“Our focus is to introduce products that not only enhance the brand, but simultaneously align well with the rising aspirations of customer segments,” Mayank Pareek, president, passenger vehicles at Tata Motors, said. As part of the aggressive turnaround strategy, Tata Motors have renewed focus on filling in product gaps and tapping the white spaces that will emerge, he pointed out.