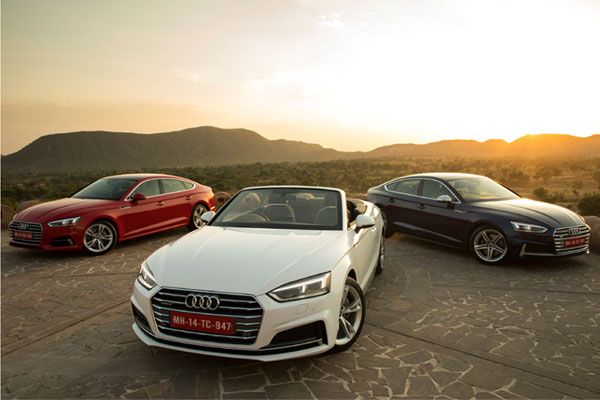 Audi, India’s second biggest luxury carmaker by sales, on Thursday expanded its India line-up by introducing the second generation all new A5 Sportback, A5 Cabriolet and S5 Sportback at Rs 54.02 lakh, Rs 67.51 lakh and Rs 70.60 lakh, respectively at any showroom in the country.

While the A5 Cabriolet rivals the Mercedes-Benz C 300 Cabriolet, the A5 Sportback will be a more stylish take on the A4 sedan, without any direct rivals at this price point in Asia’s third biggest car market.

The S5 Sportback, the performance car will take on Volvo’s S60 Polestar and Mercedes-AMG’s C 43 Coupe in the growing luxury car market in the country, which is pegged around 35,000 plus units.

Audi, which completed a decade in India and ruled the roost, was toppled as the luxury car market leader in the country by the compatriot archrival Mercedes-Benz last in January 2016. The other competitors are BMW, Tata Motors-owned Jaguar Land Rover and Swedish brand Volvo Cars.

Earlier, the Mumabi-headquartered sold the previous-generation S5 Sportback in India and the range-topping RS5 Coupe as well.

This is the first time that Audi has brought the drop-top version of the A5 to the market.

The new Audi A5 sportback fits in between the A4 and the A6 sedans in terms of rough pricing and although it does offer slightly less practicality in terms of rear leg space and head room, it does offer a prettier package as a whole. Moreover, it fits the bill of a buyer, who wants something different and unique from his or her car.

The Audi A5 family comes packed with features like a large sunroof and various interior seat packages. The A5 Sportback/A5 cabriolet/S5 Sportback also comes standard with the likes of the LCD instrument cluster display that replaces the standard gauges and a large infotainment system that is controlled by Audi's MMI or multimedia interface. The infotainment system is also equipped with the likes of satellite navigation and Apple CarPlay.

The A5 Sportback and A5 Cabriolet are both powered by the same 2.0-litre, four-cylinder, turbo-diesel engine that produces 190 hp and 400 Nm of peak torque.

Both body styles also get same seven-speed dual-clutch automatic transmission. The Sportback only comes with front-wheel-drive while the A5 Cabriolet gets Audi’s Quattro all-wheel-drive system.

The new range-topping S5 Sportback gets a 3.0-litre, turbo-petrol, V6 motor producing 354 hp and 500 Nm of twisting force, and it is mated to an eight-speed automatic gearbox that sends power to all four wheels.

The 2.0-litre diesel and the 3.0-litre petrol motors, both get an engine start-stop system as standard.

“The A5 range stands for the beginning of a new era and we will continue to offer the best of luxury mobility solutions in India by introducing new models in exciting body types and by entering into new segments,” Rahil Ansari, head at Audi India told Financial Chronicle.

The brand has so far introduced 11 new cars in the country in 2017.