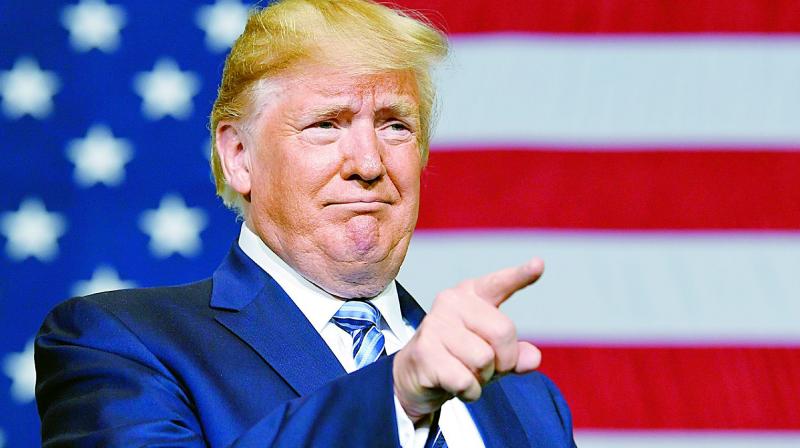 Washington: US President Donald Trump has claimed that China has lost more than 20 lakhs jobs in a very short period of time, due to his tough policies, including imposing additional import tariffs.

"China is eating the tariffs because of monetary manipulation. And also, they're pouring a lot of money into their country because they don't want to lose jobs... They lost over two million jobs in a short period of time," Trump told reporters at Bedminster in New Jersey on Sunday.

Trump said China wants to make a trade deal with the US. Officials of the two countries are having a series of meetings on this for the past several months. "We will see what happens. But they definitely want to make a deal," he said.

He refused to comment on reports that he has spoken to the Chinese President Xi Jinping on this.

"They've had the worst year they've had in 27 years because of what I've done. They want to come to the negotiating table. The companies are leaving. They are laying off millions of people because they don't want to pay 25 per cent (import tariff)," he said.

Trump said that the Chinese want to come to the table for talks on a trade deal.

Asserting that he understands tariffs work very well, he said that in the case of China, it is eating the tariffs, at least so far.

Responding to a question about fear of a global economic recession, Trump said if it slowed down, it would be because he has to take on China and some other countries.

"When all of that normalizes, we've got a rocket ship. Our country is going to be stronger, by far, than ever before. I mean, if I wanted to make a bad deal and settle on China, the market would go up but it wouldn't be the right thing to do. I'm just not ready to make a deal yet. China would like to make a deal. I'm not ready," Trump said.

Another 10 per cent tarrif on products worth USD 300 billion will come into effect on September 1.

As a result of the ongoing trade war between the US and China, imports from China to the US dropped by 12 per cent and America's export to China fell by 19 per cent.

Trump has so far maintained that China has been unfair to the US. China has also taken several retaliatory steps.

According to a Commerce Department report, the total value of bilateral goods exchanged with China fell 14 per cent in the first half of the year to USD 271.04 billion, The Wall Street Journal said.