The Reserve Bank of India (RBI) in its fifth bi-monthly monetary policy review on Wednesday maintained status quo on rates and continued with its stance of calibrated tightening, but hinted at future policy easing. 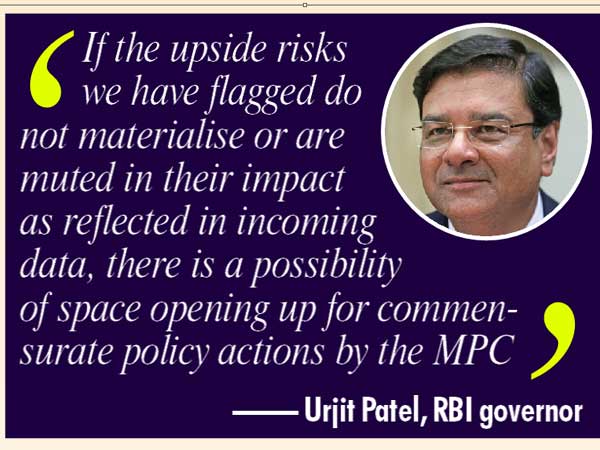 The Reserve Bank of India (RBI) in its fifth bi-monthly monetary policy review on Wednesday maintained status quo on rates and continued with its stance of calibrated tightening, but hinted at future policy easing. While the repo rate remains unchanged at 6.5 per cent, the reverse repo rate has been kept at 6.25 per cent. Though the rate decision was unanimous, Ravindra Dholakia of the six-member monetary policy committee (MPC) voted for a change in stance to ‘neutral.’ Addressing reporters, RBI governor Urjit Patel said if the consumer inflation (CPI) stays below 4 per cent on a durable basis, then a case can be made for reversal of stance to accommodative. “If upside risks to inflation don’t materialise, or stay muted, there is the possibility of space for commensurate action,” he said.

Despite calls for the cash reserve ratio (CRR) cut to ease liquidity, RBI chose to retain it at 4 per cent and clarified that CRR is not in the MPC ambit. RBI reassured the market of more bond purchases via the open market operations (OMO) until March. RBI also announced a calibrated reduction in statutory liquidity ratio (SLR) by 25 bps per quarter, starting from Q4FY19 until the SLR reaches 18 per cent (versus 19.5 per cent at present) in line with its stated intention to reduce it over time.
RBI noted the downward trajectory of CPI in the recent months and revised its outlook to 2.7-3.2 per cent for H2FY19 against earlier estimate of 3.9-4.5 per cent. That is below the medium-term target of 4 per cent.

The CPI estimate for H1FY20 was revised lower to 3.8 per cent from 4.2 per cent against 4.8 per cent earlier. Even as inflation projections have been revised downwards and some of the risks pointed out in the last resolution have been mitigated, especially of crude oil prices, several uncertainties still cloud the inflation outlook, RBI said. “Although recent food inflation prints have surprised on the downside and prices of petroleum products have softened considerably, it’s important to monitor their evolution closely and allow heightened short-term uncertainties to be resolved by incoming data,” said MPC statement.

“First, prices of several food items are at unusually low levels and there is a risk of sudden reversal especially of volatile perishable items. Also, uncertainty continues about the exact impact of minimum support price (MSP) on inflation. The medium-term outlook for crude oil prices remains uncertain due to global demand conditions, geo-political tensions and decision of Opec that could impinge on supplies. Households’ one-year ahead inflation expectations remain elevated and unchanged. Risks of fiscal slippage exist at the Centre and/or states,” RBI said.

RBI retained GDP October policy estimate for FY19 at 7.4 per cent and for H1FY20 at 7.5 per cent. RBI also proposed that banks would now have to link the interest rates charges by them on different categories of loans to the external benchmarks instead of internal benchmarks for better transmission of the policy rates and improving transparency.

Zarin Daruwala, CEO, Standard Chartered Bank (India), said, “While MPC maintained its stance of calibrated tightening, it was heartening to note that it was ready to ease monetary policy to support the economy. The sharp reduction in the inflation forecast accompanied by planned SLR cuts should result in lower costs for borrowers. The move to link retail/MSME loans to external benchmarks should also result in better monetary transmission. Additionally, the decision on allowing non-resident entities to access the interest rate derivative market will help banks to better manage their risk.”

B Prasanna, head (global markets group) at ICICI Bank, said, “Going forward, we believe MPC is likely to remain on a prolonged pause. This also gives us confidence that the scope for a cut in rates becomes possible if realised inflation in the next few months were to confirm or undershoot the revised path forecast by MPC. The road map for a gradual reduction in SLR will help release resources for credit and will become meaningful in an environment of OMO purchases.”

However, Karan Meh-rishi, lead economist at Acuité Ratings and Research, said RBI’s decision to hold rates at 6.5 per cent was largely driven by a challenging liquidity scenario and benign domestic inflationary conditions. “Nevertheless, we prefer to maintain an upward bias on our rate outlook since the combined CPI number is artificially deflated by lower food inflation figures. Also, the December 6 Opec meeting will be crucial as the members may consider constricting supplies in view of the falling oil prices. Additionally, there is a risk of the market misunderstanding the stance of the US Federal Reserve, which may not be in a position to hold rates longer. Collectively, these factors may not give RBI a long enough breather,” he said.