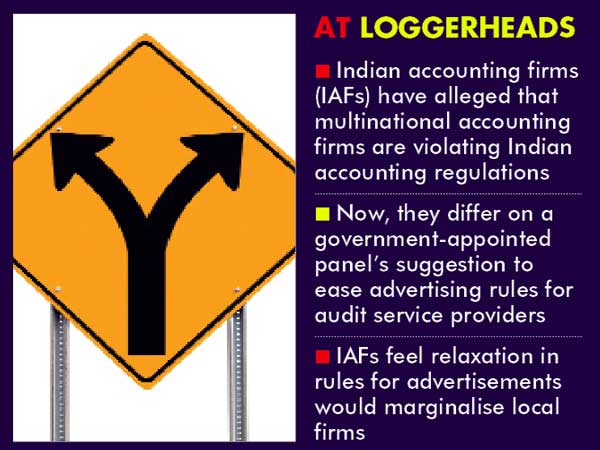 Indian audit firms and their big foreign counterparts are divided on more issues than one. Indian accounting firms (IAFs) have alleged that multinational accounting firms (MAFs) are violating Indian accounting regulations. Now, they differ on a government-appointed panel’s suggestion to ease advertising rules for audit service providers. IAFs hold that relaxation in rules for advertisements would marginalise local firms. MAFs on contrary argue that existing regulation is extremely restrictive and easing it would bring the country in line with global norms.

“The relaxation is not going to help the local firms. A professional work is based more on the performance rather than advertisement. If advertisements are allowed, the firms which have more financial power would be able to get more work. Accounting service is not a consumer product,” said Ved Jain, former president of the Chartered Accountants Association.

Foreign accounting firms, however, do not agree and maintain that all major economies allow auditing firms to solicit work by placing advertisement in the media.

“It (easing of rule) is very much required. It will be very progressive step and in line with current time. Anyway, the committee of experts (CoE) has suggested reasonable restriction on placing advertisement. It aligns India to the rest of the world. These restrictions were removed many years ago in different parts of the world,” said Vishesh C Chandiok, CEO, Grant Thornton India LLP.

The Institute of Chartered Accountants of India (ICAI) guidelines allow advertisement in the press for very limited purpose such as recruiting staff in the members' own office or on behalf of clients requiring staff or wishing to acquire or dispose of business or property.
The CoE has recommended that CAs and CA firms be permitted to advertise their services and solicit work provided they are not false, misleading or deceptive. The CA firms would also be not permitted to exaggerate claims for services offered.

Following directions from the Supreme Court in the case of S Sukumar versus the Secretary, Institute of Chartered Accountants of India, the government had set up a three- member panel to look into regulating audit firms and the networks. The committee headed by Anurag Agarwal, joint secretary, ministry of corporate affairs, submitted its report this week to the government.

Apart from finding the MAFs operations in line with Indian regulations, the CoE has recommended activation of the independent regulator National Financial Reporting Authority (NFRA) and formation of multi-disciplinary partnerships.