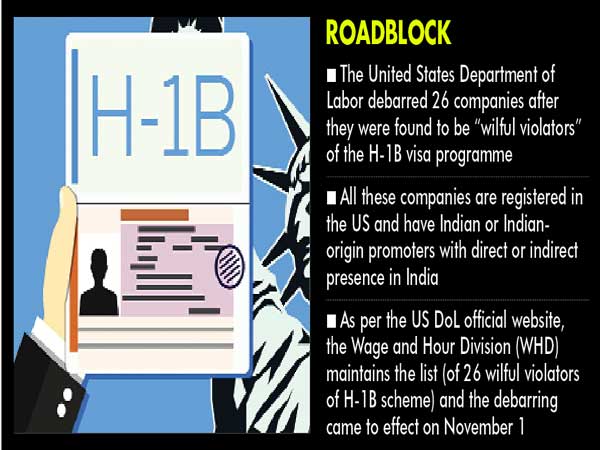 The Trump administration continues its relentless crusade against immigrant workers and imported talent.

The United States Department of Labor (DoL) has debarred 26 companies after they were found to be “wilful violators” of the H-1B visa programme.

Interestingly, all these companies are registered in the US and have Indian or Indian-origin promoters with direct or indirect presence in India.

As per the US DoL official website, the Wage and Hour Division (WHD) maintains the list (of 26 wilful violators of H-1B scheme) and the debarring came to effect on

A DoL proceeding or a Department of Justice proceeding under the Immigration and Nationality Act can name a company as a “wilful violator” if it has committed either a wilful failure or a misrepresentation of a material fact in Labour Condition Application or in furnishing misinformation about its H-1B dependents. Deliberate violation comes to play even when an employer displaces a US worker at the time of filing an H-1B visa petition or when a company fails in making a sincere effort to recruit a US worker before it decides to import a talent from India. Also a wilful violator is subject to random investigations by DOL for a period of five years from the date it is determined to be one.

Vivek Tandon, founder and CEO of California-based EB5 BRICS said, “Such finding of fraud, abuse and misuse of the H-1B Visa programme is exactly the reason why the Trump administration is narrowing the definition of ‘specialty worker’ and why we see a tremendous increase in issuance of RFE - request for evidence and denials of H-1B Visa petitions.”

Sanjay Mistry, director, Client Relations of New York-based Davies & Associates LLC Immigration Attorneys said, “Companies participating in the H-1B visa programme are facing increased bureaucracy, and there has not only been a rise in the number of wilful violations, but also in the number of rejections for Indians compared with other nationalities. As the number of H-1B denials increases, we are seeing more people opt for alternative, more reliable routes into the United States, such as the EB-5 investor visa programme and an E-2 visa coupled with citizenship of Grenada in the West Indies.”

Earlier this year an Indian CEO was held for duping US visa authorities. He was charged with H-1B fraud on 200 counts, reports Gadgets Now. In 2012 a New Jersey-based consulting company was fined $300,000 as it was deemed a wilful violator of the H-1B visa programme.