The government is formulating a new policy to “warehouse” stressed power assets and bring it back to health gradually through equity support from banks and power sector lending agencies and operational support from an asset management company or power generating entity like NTPC. 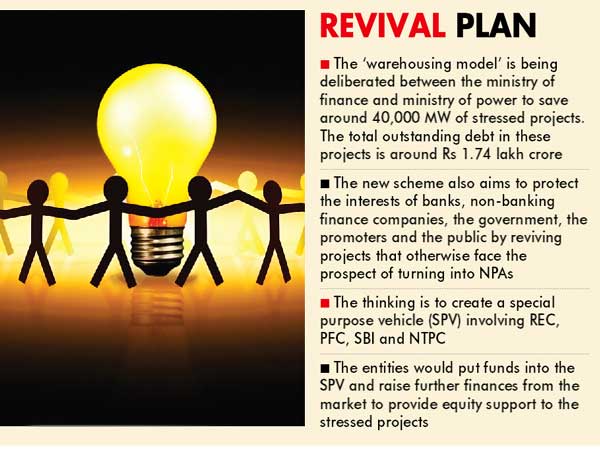 The government is formulating a new policy to “warehouse” stressed power assets and bring it back to health gradually through equity support from banks and power sector lending agencies and operational support from an asset management company or power generating entity like NTPC.

The ‘warehousing model’ is being deliberated between the ministry of finance and ministry of power to save around 40,000 MW of stressed projects. The total outstanding debt in these projects is around Rs 1.74 lakh crore.

The new scheme also aims to protect the interests of banks, non-banking finance companies, the government, the promoters and the public by reviving projects that otherwise faces the prospect of turning into non-performing assets (NPAs), resulting in further investment squeeze in the power sector.

Under the new model, the thinking is to create a special purpose vehicle (SPV) involving state-owned funding and operating entities such as Rural Electricity Corporation (REC), Power Finance Corporation (PFC), State Bank of India (SBI) and NTPC. The entities would put funds into the SPV and raise further finances from the market to provide equity support to the stressed projects.

NTPC may be given additional task to operate the stressed power plant till the time it revives.

Post a turnaround, the SPV could decide either to sell the asset to a new owner or transfer it back to existing promoters to ensure that banks get back their regular share of dues.

“The new plan is still in early stages of discussion and its finalisation would depend upon Reserve Bank of India (RBI) agreeing to the new mode of loan restructuring for the power sector,” said a government official privy to the development.

“The central bank has already rejected a proposal to have a special dispensation for the power sector in the case of its recent one-day default regulation. It has also withdrawn all other restructuring schemes and has favoured loan resolution insolvency process,” the official added.

Sources said that one of the preconditions in the ‘warehousing’ model could be a change in the management of the asset in stress till the time the revenues start servicing the debt or a market is found.
The promoter, however, may be retained with minority shareholding in few cases where their presence becomes essential for smooth operations.

The government is bringing in different plans to address the issue in the power sector. Apart from warehousing,  SBI has framed a new scheme — Scheme of Asset Management and Debt Change Structure, or Samadhan, which proposes sale or takeover of the stressed assets to prevent their liquidation.

Under this scheme, the bank has shortlisted 11 projects with a combined capacity of 12,640 MW for restructuring in the first phase. The projects include Lanco Infratech’s 1,200 mw Anpara project in Uttar Pradesh, Jaypee Power Ventures’ 1,320 mw Nigrie project in Madhya Pradesh, the 2,400 mw KSK Mahanadi plant in Chhattisgarh, Jindal India Thermal Power, Ind Barath Power and others.

Unlike the ‘warehousing model’, this scheme would be offered for already completed projects or those nearing completion and where power purchase agreements are in place. The debt in these projects would be divided into sustainable and unsustainable category and unsustainable debt would be converted into equity by lenders. The promoter holding would be reduced to below 25 per cent and majority stake would then be bid out.

Apart from 34 identified projects, the schemes would also be offered to 20 hydro projects with capacity of over 6,500 MW that have also been categorised as stressed that could be revived with minimum intervention. The total advances towards electricity generation sector of scheduled commercial banks (SCBs) are about Rs 4.71 lakh crore. While most of them are standard assets, stressed projects have the potential to turn into non-performing assets (NPAs) without proper intervention.

“Addressing the equity issue of stressed projects with the proposed fund is a good idea but the government should also look at other problems such as lack of fuel linkage and PPAs plaguing the projects,” said an industry expert not willing to be named due to his involvement with power ministry on different projects.

The power ministry has identified four key reasons for stress in the generation sector. These are: Non-availability of regular fuel supply arrangements, lack of power purchase agreement (PPA) tie-ups, inability of the promoter to infuse the equity and service debt, and regulatory and contractual issues. The idea of new schemes is not to allow stress sale of some prized power assets that benefits none. Moreover, with power demand expected to shoot up soon, there is an expectation that PPAs would come through providing fresh breathing ground to stressed projects.

Stressed assets have been identified on the basis of their inability to service loan due to various operational factors like lack of PPAs or fuel linkage etc. There are few cases where the stress has continued even after an earlier restructuring. The RBI’s latest regulations on stressed assets provide resolution of these assets in 180 days after which it would be mandatory for these projects are put under insolvency resolution process under IBC. If not resolved even then, these plants may go into liquidation.

Meanwhile, the Allahabad High Court last week ruled that a power company can’t be taken to bankruptcy court for not repaying loans unless it has been declared a wilful defaulter.

The court has also asked the finance secretary to meet power producers in June to discuss stressed assets, giving banks longer time to find a resolution to stressed accounts.