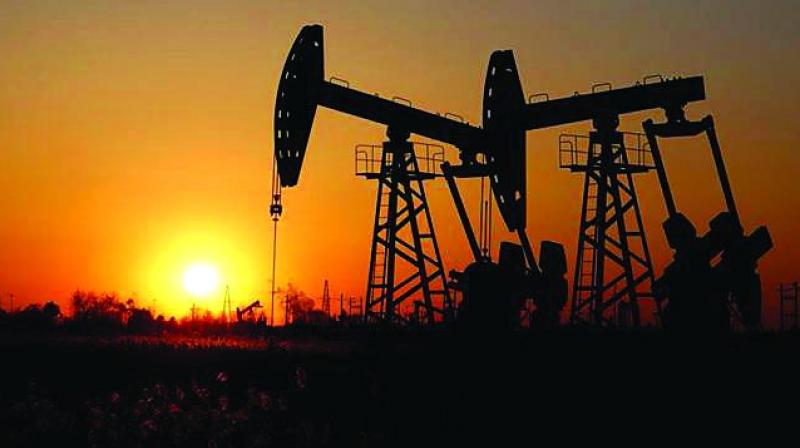 Tokyo: Oil prices on Friday were set for their biggest weekly gains since early July, boosted by a decline in US inventories and a looming hurricane in Florida, while new signs of trade talks between the United States and China emerged.

US West Texas Intermediate (WTI) crude futures fell 7 cents, or 0.1 per cent, to USD 56.64 a barrel. The contract is set for a gain of more than 4 per cent this week.

“What is given, can be taken away though, and the rally looks more like it’s running on vapours than petrol,” he said.

Worries about a slowdown in economic growth due to the trade war between the United States and China and the impact on oil demand, the countries are world’s two biggest oil consumers, kept a lid on price gains, even as falling inventories indicate a balancing market.

However, on Thursday, the United States and China gave signs that they will resume trade talks, discussing the next round of in-person negotiations in September ahead of a looming deadline for additional US tariffs.

The approach of Hurricane Dorian toward Florida raised fears that offshore US crude producers may shutter output if the storm passes into the Gulf of Mexico over the weekend.

Dorian is heading toward landfall on the Atlantic coast of Florida over the weekend and may enter into the eastern Gulf of Mexico next week. It is forecast to strengthen and become a highly dangerous Category 4 hurricane on Sunday, the National Hurricane Center said.

Last month, Hurricane Barry prompted offshore oil companies to shut as much as 74 per cent of production, lifting US crude prices, before it weakened to a tropical storm.

Government data on Wednesday showed US crude stocks dropped last week by 10 million barrels to their lowest since October as imports slowed, while gasoline and distillate stocks each fell by over 2 million barrels.

Inventories at the nation’s main delivery hub in Cushing, Oklahoma, the delivery point for WTI futures, slumped last week by nearly 2 million barrels to their lowest since December, the data showed.

But the EIA data also showed that US production rebounded to a weekly record of 12.5 million barrels per day, suggesting there is still plenty of supply available.