After hitting its life-time high, Sensex pared some gains to trade 52.93 points higher at 41,073.54 in morning session. 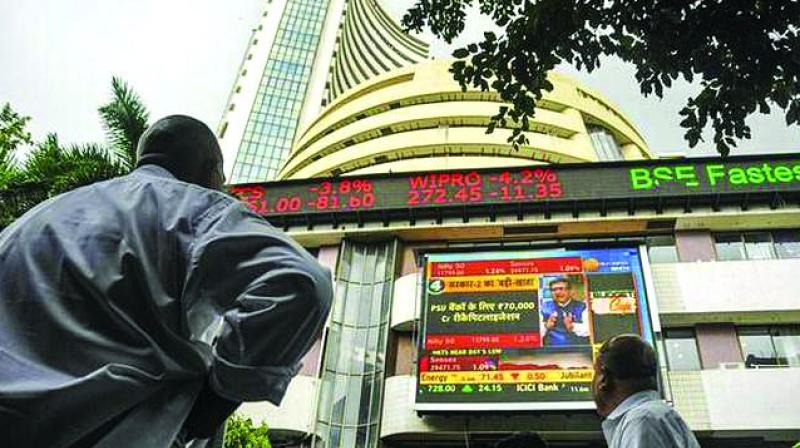 Sustained foreign fund inflow ahead of the expiry of November futures and options (F&O) contracts on Thursday is contributing to the market rally, traders said. (Photo: File)

Mumbai: Domestic equities opened at their record peaks as BSE Sensex jumped over 143 points to 41,164 in early trade on Thursday tracking gains in index-heavyweights TCS, ICICI Bank and L&T ahead of November derivatives expiry.

TCS was the top gainer in the Sensex pack, rising up to 1 per cent, followed by Tata Steel, ICICI Bank, L&T and SBI.

On the other hand, Tata Motors, HUL, ONGC, Vedanta and Hero MotoCorp were trading in the red.

Sustained foreign fund inflow ahead of the expiry of November futures and options (F&O) contracts on Thursday is contributing to the market rally, traders said.

However, weak cues from other Asian markets capped the gains, they added.

Bourses in Shanghai, Hong Kong, Seoul and Tokyo were trading on a weak note after China said it was ready to take "firm countermeasures" against the United States after President Donald Trump signed a law supporting pro-democracy protesters in Hong Kong, putting a dampener on hopes of an early trade truce over tariffs.

Stocks on Wall Street ended in the green on Wednesday.

On the currency front, the rupee depreciated marginally against the US dollar to trade at 71.37 in early session.

Brent futures, the global oil benchmark, slipped 0.27 per cent to USD 62.84 per barrel.