Two wheelers and three wheelers, were expected to decline by 6-7 pc this fiscal as compared with 2018-19 to around 25 million units. 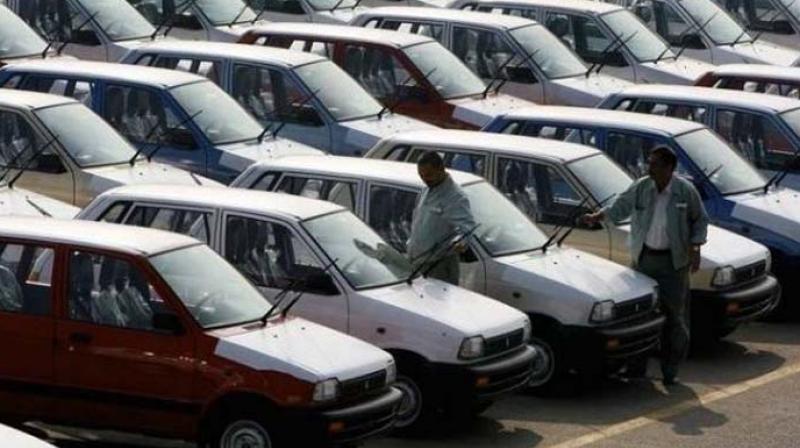 As recent as 2018-19, the sector had attained a size equivalent to 7.5 per cent. (Representational Image; Photo credit: AFP/ File)

New Delhi: Indian auto sector's contribution to the GDP in the current fiscal may come down to 7 per cent from 7.5 per cent in 2018-19 with overall revenue of the original equipment manufacturers (OEM) expected to dip by up to 6 per cent in 2019-20, according to a study.

As per Acuite Ratings & Research, the total domestic sales of the automobile industry, including, passenger vehicles, commercial vehicles, two wheelers and three wheelers, were expected to decline by 6-7 per cent this fiscal as compared with 2018-19 to around 25 million units.

In the second quarter (July-September) of this fiscal itself, the ratings firm expects OEM revenues to drop by 23-25 per cent to Rs 0.6 trillion as compared with 0.8 trillion in the same period previous fiscal, leading to sector's contribution to Gross Value Addition (GVA) of the country to decline - thus affecting its overall contribution to the GDP.

The understanding is influenced by the fact that the sector follows push model, wherein the OEMs drive the entire automotive ecosystem, it added.

Consequently, any decline in revenue and sales of these entities will directly impact the auto ancillary players and dealers as well, the study noted.

As per the government's automotive mission plan, the sector's contribution expected to reach 12 per cent by 2026.

Similarly, the continuously weak sentiment among consumers may not provide respite even during the festive season and the overall automobile industry sales are expected to remain below similar periods in the past, the study noted.

Recent trends in retail sales indicate that despite high discounts and offers, major players in the industry have failed to attract buyers for purchasing vehicles even at the onset of festival season, the report said.

Weak rural demand is one of the primary reasons for the slowdown in the sector, it added.

"Going forward, preponement of purchase decision is anticipated in second half of the current fiscal before transition to BS VI emission norms," the study noted.