Automakers, parts manufacturers and dealers have laid off about 350,000 workers since April. 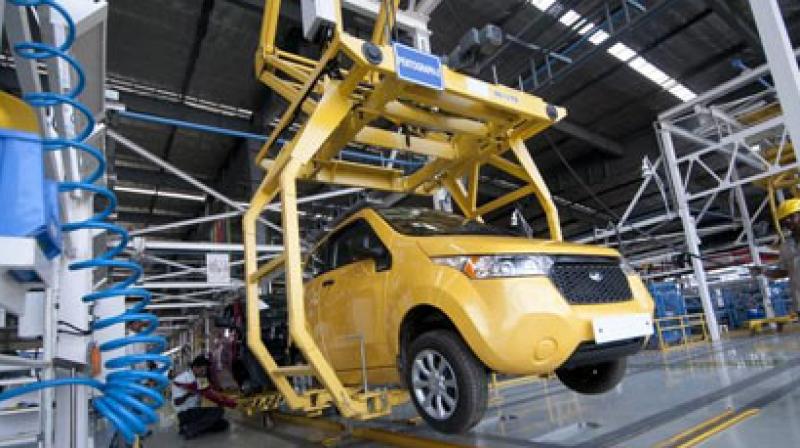 The auto sector, which contributes more than 7 per cent of India’s GDP, is facing one of its worst downturns. (Photo: Representational/AP)

New Delhi: Slumping sales of cars and motorcycles are triggering massive job cuts in India’s auto sector, with many companies forced to shut down factories for days and axe shifts, multiple sources said.

The cull has been so extensive that one senior industry source told Reuters that initial estimates suggest that automakers, parts manufacturers and dealers have laid off about 350,000 workers since April.

Within this previously unreported figure, car and motorcycle makers have laid off 15,000 and component manufacturers 100,000, with the remaining job losses at dealers, many of which have closed, the industry source said.

Reuters was able to identify at least five companies that have recently cut or plan to cut hundreds of jobs, mainly from their temporary labour force.

The downturn - regarded by industry executives as the worst suffered by the Indian auto industry - is posing a big challenge for Prime Minister Narendra Modi’s government as it begins its second term at a time when India’s jobless numbers are climbing.

To revive the sector, auto executives plan to demand tax cuts and easier access to financing for both dealers and consumers at a meeting with officials from India’s finance ministry scheduled for Wednesday, the senior industry source said.

The industry’s plight was highlighted by the Automotive Component Manufactures Association of India (ACMA), with the trade body’s director general, Vinnie Mehta, saying the sector was experiencing a “recessionary phase”.

The malaise has been spreading across much of the industry, both in terms of vehicle type and components as well as geographically in India’s manufacturing hubs.

For example, Japanese motorcycle maker Yamaha Motor and auto components makers including France’s Valeo and Subros have laid off about 1,700 temporary workers in India after a slump in sales, sources told Reuters.

Subros, which is part-owned by Japan’s Denso Corp and Suzuki Motor Corp, has laid off 800 workers. Indian parts maker Vee Gee Kaushiko has cut 500 people while Yamaha and Valeo last month reduced their workforces by 200 each, said several sources aware of the cuts.

Meanwhile, automotive supplier Wheels India could cut its temporary workforce by as much as 800 and has started realigning its shifts, two of the sources said.

The layoffs come as carmakers including Honda Motor Co, Tata Motors and Mahindra & Mahindra have implemented brief suspensions to production in recent weeks in the face of slow demand, separate sources said.

The auto sector, which contributes more than 7 per cent of India’s GDP, is facing one of its worst downturns.

Passenger vehicle sales have dropped for nine straight months through July, with some automakers suffering year-on-year declines of more than 30 per cent in recent months.

Manpower is the only variable factor for companies and more workers will face the axe, said ACMA’s Mehta.

Yamaha, Subros, Vee Gee Kaushiko and Wheels India did not respond to requests for comment.

Valeo India said it is realigning for changing conditions and has trimmed its temporary workforce.

The fallout from the auto slump could be huge. The sector employs more than 35 million people directly and indirectly, accounting for nearly half of India’s manufacturing output.

India’s jobless rate rose to 7.51 per cent in July 2019 from 5.66 per cent a year earlier, according to private data group CMIE. The CMIE data is more up-to-date than government figures and regarded in financial markets as more credible.

At least 7 per cent of temporary workers employed by 15 automakers in India have lost their jobs in recent months, said Vishnu Mathur, director general at the Society of Indian Automobile Manufacturers (SIAM).

“It is a conservative estimate based on our initial analysis,” he said.

Maruti Suzuki, India’s biggest carmaker, cut its temporary workforce by 6% over the past six months, Reuters reported on Friday.

Tata Motors has had week-long shutdowns at four of its plants in the past two weeks, while Mahindra has said it had 5-13 days without production at various plants between April and June.

A statement from Tata Motors said it has aligned production with demand and adjusted the shifts and temporary workers.

Honda has stopped production of some car models at its plant in the northwestern state of Rajasthan since July 16 and is halting manufacturing entirely at its second plant in Greater Noida on the outskirts of Delhi for 15 days from July 26, two sources said.

The company’s Indian business said that production management will be critical throughout the year and it is seeking to avoid stock build-up.