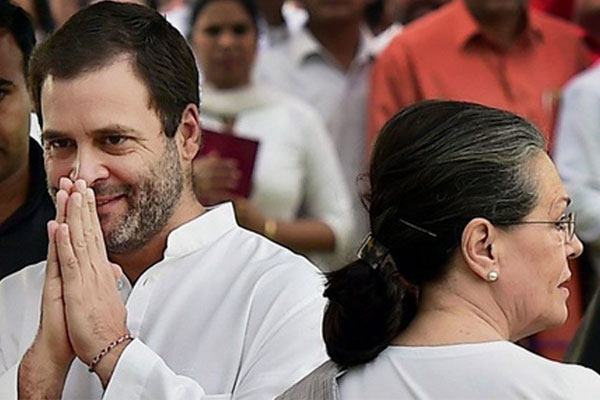 Putting all speculations to rest, Congress chief Sonia Gandhi on Friday said her son and party’s vice-president Rahul Gandhi will soon take over as president of the 132-year-old party.

“You have been asking this for so many years and it’s now happening.”Sonia. said pointing at Rahul on the sidelines of the launch of former president Pranab Mukherjee's autobiography here on Friday.

Rahul Gandhi is all set to take over as Congress chief from his mother after Diwali, sources had said, as the party is busy wrapping up an elaborate process of electing state chiefs, members of central bodies and the president.

The Congress Working Committee (CWC), the party’s highest decision-making body, is likely to meet soon to decide the dates for the election of a new president.

The Congress V-P, however, refused to be drawn into the subject of his takeover as party chief and deflected questions by referring to a controversy over BJP president Amit Shah’s son Jay Shah. What about Jay Shah's takeover and his huge increase in his turnover, TV channel quoted Rahul as saying.

The chorus in favour of Rahul Gandhi as party president had been growing louder over the years. The Uttar Pradesh Congress Committeeon Thursday unanimously passed a resolution that Rahul be made the party’s national president. Mumbai and Rajasthan state units also proposed Rahul's elevation.

Rahul Gandhi, 47, has been the party’s vice president since 2013 and has been assisting his 70-year-old mother Sonia Gandhi. She took over as the Congress president from Sitaram Kesari in 1998 and is the longest-serving head in the party’s 131-year history. Sonia Gandhi, who is currently in her fourth term, was due to complete her tenure in 2015, but it was extended by two years.

Earlier the internal party polls were held every three years, but following a change in the party constitution it now mandates organisational polls every five years. The last time the party witnessed a real contest for the top job was in 1997, when ad hoc president Sitaram Kesri was faced with three other contenders - Rajesh Pilot, Sharad Pawar and AR Antulay.

A year later, Sonia had replaced Kesri and in the internal polls in 2000, recorded a walkover against senior leader from Uttar Pradesh, Jitendra Prasad. Since then Sonia has never faced a contest for the post.