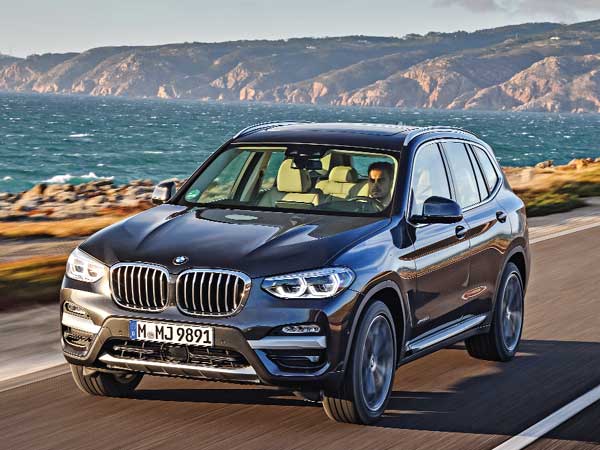 Recently, BMW India started local assembly of the 2018 X3 at its plant in Chennai and that has allowed the carmaker to place its best-selling crossover in a very competitive price range. Given its spec, size, and intent, it will face competition from the Lexus NX 300h and the Land Rover Range Rover Velar. Bookings for the 2018 BMW X3 were opened earlier this month and deliveries will commence soon, say BMW India.

Vikram Pawah, President, BMW Group India said, “BMW X3 established the premium mid-size sports activity vehicle segment in India and became a trailblazer with its modern character. The all-new BMW X3 is set to write the next chapter in its success story with an even more striking, dynamic design language, powerful yet efficient drive systems and luxurious equipment.

“Practical both on and off road, the all-new BMW X3 is fully equipped for the most diverse driving demands, combining everything you need for wherever your day takes you.” He added.

Cosmetically, the new X3 retains the previous version’s silhouette but features changes such as the larger kidney grille, headlamps mounted further apart and differently designed L-shaped tail-lamps. Due to the new platform underpinning the model, the chassis is said to be significantly stiffer; the weight is also said to be reduced by 55kg. While the overall dimensions are quite similar to the outgoing model, the wheelbase on the new X3 is longer, which should aid in increasing interior room.

It continues to use the potent 2.0l diesel engine, which in its new-generation xDrive20d guise churns out 190hp of power and 400Nm torque, Which gets the SUV from 0-100 km/hr in just 8 seconds. The eight-speed Steptronic automatic handles transmission duties on both cars. While that may not be the most powerful engine in its class, the B47 four-cylinder oiler is known to be an eager performer and should be impressive with the third-gen X3's lightweight construction. An eight-speed transmission is standard and transfers the power down to the road via the xDrive rear-biased all-wheel-drive system.

BMW have their work cut out with the new X3, which will also take on the very serious competition in the form of the Audi Q5, the Volvo XC60 and the one to beat in this segment the Mercedes-Benz GLC. As of now, it would seem that the BMW has what it takes on paper to take on any of these three luxury SUVs with this refresh bringing to par if not over par.