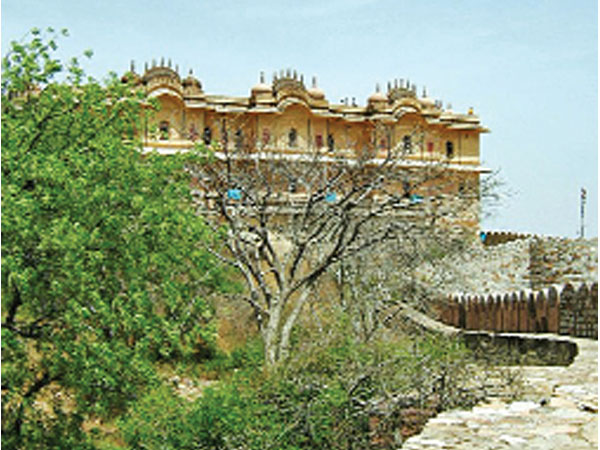 There are a large number of forts scattered across India. Over the past month I seem to have written about a number of them and now I find there is one more fort that needs to be written about. The Nahargarh Fort at Jaipur has just donned the garb of a Sculpture Park — and that too, the first in India! The most interesting part is the coming together of the past and the present with a Sculpture Park in this splendid Palace.

The Sculpture Park was formally launched on 10 December 2017, by the Chief Minister of Rajasthan Vasundhara Raje who stressed on the fact that it was made possible by a unique collaboration between the Government of Rajasthan, Saat Saath Arts and a number of corporate sponsors.

Nahargarh Fort, is located on the opposite side of the same hillock as the more famous Amer Fort. Overlooking the city of Jaipur, The fort, which dates back to mid-18th century, will now have a Sculpture Park to add to its  popularity. Strictly speaking, it is the Madhavendra Bhawan Palace that lies within the Fort that is the backdrop for the work of a group of modern sculptors from India and abroad. The palace was built at the end of the 19th century by Sawai Madho Singh and is the best preserved part of the fort. Created as a pleasure retreat, Madho Singh had built one large suite for himself and six suites for his queens, creating an intriguing network of rooms, corridors and staircases, with delicate frescoes on its walls.

Strangely, the Madhavendra Bhawan Palace which has been quoted as being “rigid in its geometric symmetries and heavyset countenance” has been chosen as a backdrop for exhibiting modern sculpture.  For an answer to this choice we must turn to Park Curator Peter Nagy,  Director of Nature Morte Art Ltd, who is known for his unusual and often ingenious art projects. Nagy says the idea struck him during his days in Jaipur during the Jaipur Virasat Festival. “The idea of placing contemporary art into this traditional yet somehow strangely proto-modernist structure had simmered on a back-burner in my mind, ever since. Cut to 2015, and my flighty fantasy found sympathetic reception with the-powers-that-be.”

Now transformed into an art gallery and India’s first contemporary sculpture park, the palace now exhibits a range of top Indian and international contemporary artists, both in and outdoors — with artworks all made of hardy material such as bronze, stone and wood. The pieces have been carefully and sensitively installed to ensure that no damage is made to any surface of the heritage palace. Curated by Peter Nagy, a group of known artists have put together an interesting exhibition combining sculpture practices of today. The varied subjects and styles have found a place here, created by sculptors from India as well known international names.

At the opening ceremony, there were a number of important messages from those involved.

To begin with Vasundhara Raje, the Chief Minister of Rajasthan said,  “For many years now, people have been coming to this beautiful palace—they come, they look and go away, but to keep this space living, it is important to merge it with today and if people are able to get to the works, where their imagination can be captured, where things can take off, where things can happen within these beautiful walls, I think it’s a privilege for someone like me to allow it to happen. For Jaipur, it is a great privilege to be able to see these international artists. I would like to thank Peter Nagy, Aparajita Jain, Shreyasi Goenka, the wonderful artists that are displaying here and everyone involved in making the Sculpture Park a reality.”

Peter Nagy went on to say, “For most of my career as a gallerist and curator, I have been trying to break away from the white-box exhibition space. With this project, I am able to indulge my passions for art, architecture and decor into a marvellous synthesis of the past and the present.”

Aparajita Jain, Founder & Director of Saat Saath Arts said, “Our initiative aims to promote India’s growing interest in contemporary art and culture whilst also embracing its important heritage. The Sculpture Park at Madhavendra Palace is a true amalgamation of the best of India’s past and present, made possible through a unique collaboration between the public and private sector.”

Shreyasi Goenka, Co-Director Saat Saath Arts added, “The Sculpture Park at Madhavendra Palace, Nahargarh Fort, Jaipur will be the first of its kind where an Indian state has collaborated with a non-profit organisation to support contemporary art. We are thankful to the Government of Rajasthan for this alliance and are certain that it will set a great example on how imperative public-private partnerships are in the promotion of public art.

Visitors to Jaipur, will now have to add one more must-see tick on their list.