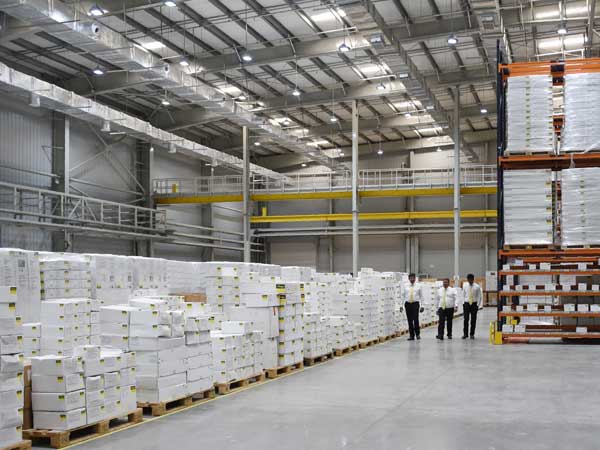 The Indian realty sector, that seen IT, ITES, BFSI & retail spaces pushing the growth in the past, now has a new Schumacher in its driver seat: the warehousing & logistics and related segments. The country is expected to see a whopping Rs 50,000 crore investments coming into warehousing infrastructure in the next 18 months, with employment possibilities for 20,000 people.

As per a recent report by JLL, warehousing will witness the highest traction, in terms of attracting investments and job creation. The focus will be on creating storage facilities for retail and consumer goods, while cold storage and agricultural warehousing will also see quantum growth, along with container storage segment. And jobs expected will have different levels of specification and specialisation, said the report.

Ramesh Nair, CEO and Country Head, JLL India said, “We have seen Rs 125,000 crore invested through private equity in warehousing space since 2014. It made up approximately 10 per cent of total PE investment in 2017, and percentage is expected to grow further as a revolutionary growth is expected the country’s warehousing and logistics sector.

A recent Warehousing Market Report 2018 by Knight Frank unravelled the present scenario of the Indian logistics sector along with providing a definitive view on the country’s top warehousing markets which include Mumbai, NCR, Bangalore, Chennai, Pune, Hyderabad and Ahmedabad.

Leasing transactions in the warehousing sector across key Indian markets burgeoned to 25.7 mn sq. ft in 2017, recording 85 per cent spike YoY, said Knight Frank report. The National Capital Region (NCR) attracted the highest footprint in terms of transactions in the warehousing space with leasing of 6.5mn sq.ft in 2017, followed by Mumbai at 5.2 mn sq. ft.  Mumbai recorded the largest YoY growth over other key Indian markets with a staggering 231 per cent jump in warehousing space leasing in 2017. NCR followed closely with 129 per cent YoY increase. Bangalore (90 per cent), Ahmedabad (86 per cent) and Hyderabad (68 per cent) witnessed flourishing double digit growth, the report revealed.

From a sectoral perspective, Knight Frank report said, manufacturing, 3PL (3rd Party Logistics), and retail accounted for two-third of the share in terms of leasing volumes in the warehousing space in 2017. While 3PL and manufacturing continued to be dominant  sectors, retail eclipsed e-commerce as the third major occupier for warehousing in India in 2017. When assessed separately the share of the manufacturing sector tapered from 30 per cent to 21 per cent while that of 3PL nearly doubled from 16 per cent to 29 per cent. Retail more than doubled its share from 9 per cent to 16 per cent, albeit on a smaller base.  Interestingly, more than one out of four (26 per cent) private equity investments in the Indian real estate sector between January 2014 and January 2018 went into the warehousing industry. Around $3.4 billion of institutional capital poured in the warehousing sector between January 2014 and January 2018. Greenfield projects or new developments attracted more than two-third of these investments followed by 27 per cent for acquisition of complete projects, added Knight Frank its market analysis.

Balbirsingh Khalsa, National Director,  Industrial and Asset Services, Knight Frank India said, “Post GST there has been a spike in demand by almost 100 per cent as companies who were till now in a wait and watch mode have now got into execution mode. For the first time we are witnessing consolidation and expansion of warehousing space,” adding, “this increase in demand from sectors like e-commerce, 3PLs, Consumer Durables, FMCG and Manufacturing to name a few coupled with a requirement for larger sized warehouses has opened up the field for more and more organised players which has led to a demand. We expect the trend to continue and get better in the days to come.”

The total warehousing space requirement in the country’s top seven markets is expected to grow from 621 mnsq ft in 2016 to 839 mnsq ft by 2020. These include Mumbai, Delhi, Bangalore, Chennai and Pune — that have active industrial presence.  The other cities that are expected to actively participate in the warehousing growth story are Surat, Kanpur and Lucknow, Ranchi, Madurai, Coimbatore, Ludhiana and Ambala, Tiruchirapalli, Nasik,   Madurai and   Jaipur.  Bhiwandi warehousing is already catering to demand of Mumbai, Navi Mumbai and Thane markets.

Confirming the trend, Anuj Puri, Chairman at ANAROCK Property Consultants said the logistics and warehousing is a rising star on private equity radars, and for very good reasons. As the logistics and warehousing sector received infrastructure status in November 2017, it holds huge growth opportunities in the future. With an upswing in e-commerce and simultaneous growth in organized retail, this sector will become a highly popular investment asset class in 2018.

As per Aditya Kedia, Managing Director, Transcon Developers, the expansion would be seen in the port and airport warehouse, inland container depots which offer services for handling and temporary storage and warehousing of import and export laden and empty containers, carried under customs control.  Agriculture Logistics, cold chain management etc will open up opportunities for large warehousing and logistics infrastructure.  A gamut of warehousing infrastructure including private, common warehousing, specialised warehouses, cold storages and free trade warehousing zones and logistics parks will come up in the coming years. The auto and auto ancillary and chemical and pharmaceutical sectors are the largest demand drivers of warehousing space. It is expected that there would be an investment of over Rs. 35,000 crore in the next three years, mostly in creating storage facilities for retail and consumer goods, Kedia added.

As per Puri of ANAROCK, there will definitely be increased activity in this sector in terms of storage capacity expansion and investments in the years to come. The e-commerce business all about speed and convenience, and spreading presence across the country will significantly help the business expansion of e-commerce majors. Also, with GST coming into force, e-commerce companies are now focusing on setting up large fulfilment centres in certain pockets of the country, as it is not a necessity to have warehouses in each city. All-in-all, the stage seems set for good action-packed expansion of the e-commerce companies - and consequently for the warehousing and logistics sector, he added.

Industrial growth is going out of cities to the peripheries and therefore going forward the demand for huge warehousing facilities is only going to increase. Huge network of connections between ports, shipyards, airports and warehouses are required. So developers who are into the process of looking structure pockets, in the next one or one and a half year should seek good results and higher sales, Amit Wadhwani, Director, Sai Estate Consultants.

Further, inter-state industrial corridors, such as the ambitious Delhi Mumbai Industrial Corridor (DMIC), and freight corridors, such as the Western and Eastern Dedicated Freight Corridors, are gaining renewed focus. Another important factor is that as more multinationals establish their operations in India, the need for good quality warehousing distribution and sourcing centres is on the rise.

Prasoon Chauhan, CEO, HomeKraft, an ATS company said, India is one of the fastest major economies of the world and warehousing plays a key role in supplementing that growth in the manufacturing centre. However, in the past warehousing was not looked as an organised play and very little thought and investment was assigned to it. “But now with tremendous growth in e-commerce companies along with consumer durable and FMCG companies expanding pan-India, we will witness growth in investments in organised and world class warehousing facilities,” he observed.