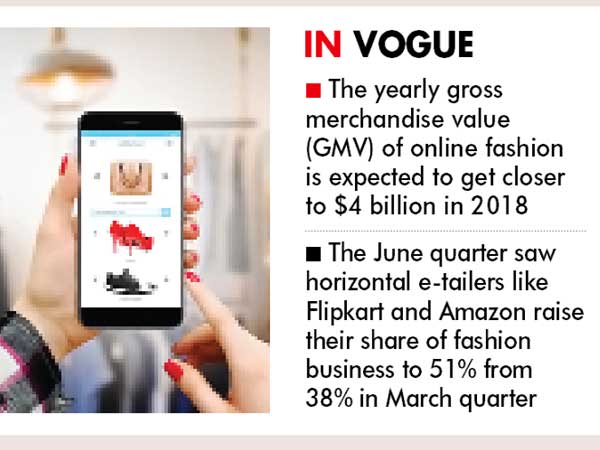 The gross merchandise value (GMV) of online fashion has touched $1 billion in June quarter and the yearly GMV is expected to get closer to $4 billion in 2018. While online fashion is growing, cross-border fashion portals have started making a mark in the market by capturing more than 5 per cent share.

Online fashion GMV, which was at $890 million in March quarter, touched $1 billion in June quarter, as per the data from RedSeer Consulting. With two more quarters remaining, the industry expects to get closer to $4 billion annual GMV in 2018. Till 2017, annual GMV of online fashion stood between $3 billion and $3.5 billion.

“The average quarterly GMV used to be $800 million. Going ahead, $1 billion could be the new normal,” said Mrigank Gutgutia, head-consumer internet, RedSeer.

The June quarter saw horizontal e-tailers like Flipkart and Amazon increasing their share of fashion business to 51 per cent from 38 per cent in March quarter. “The new wave of customers, who started using e-commerce after data charges fell significantly since 2016, have matured enough to buy fashion online.
New customers first purchase personal electronics online and based on their experience they graduate to fashion. For them, horizontal e-commerce players are still the ‘go-to-platform’. They will take some more time to graduate to fashion verticals,” said Gutgutia.

to its platform during the four-day flagship sale End of Reason Sale (EORS) in June.

They claimed that it has been the biggest sale till date for Myntra and Jabong, recording 47 per cent year-on-year growth and 8x growth over regular business days.

However, smaller vertical companies lost considerable market share as the larger verticals and horizontals did well in the June quarter.

Meanwhile, cross-border online fashion portals have grown significantly in recent times and have grabbed 5.2 per cent share of online fashion business. Chinese e-commerce companies like Shein, Club Factory, Romwe and JollyChic have started making inroads into the market with Tier II and III cities, accounting for 30 per cent of their sales.

“These companies have recently formalised their business by setting up structured supply chain and this has helped their growth,” said Gutgutia.

They sell fashion at highly competitive prices and this makes them appealing to customers in smaller cities, who have limited access to western wear. New set of online customers also find the value proposition attractive. The customers are willing to wait for longer days to get orders delivered by these companies.

However, inadequate shopping experience in terms of delivery and returns is acting as an impediment in the business of cross-border players. These players also have limited merchandise, which largely consists of western casual wear.