The promoters of tech services firm NIIT Technologies may sell their holding stake for a significant premium. Swiss investment banker Credit Suisse is said to be managing the deal, as per market sources. 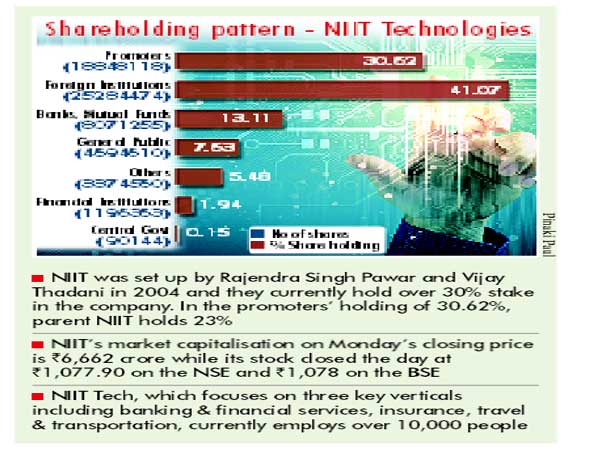 NIIT Tech founders may sell 30% holding for a premium

The promoters of tech services firm NIIT Technologies may sell their holding stake for a significant premium. Swiss investment banker Credit Suisse is said to be managing the deal, as per market sources.

NIIT was set up by Rajendra Singh Pawar and Vijay Thadani in 2004 and they currently hold over 30 per cent stake in the company. In the promoters’ holding of 30.62 per cent, parent NIIT holds 23 per cent.

Telephone calls and questions emailed to NIIT did not elicit any reply at the time of going to the press.

A section of the media recently reported that the promoters of NIIT Technologies were exploring a possible sale of the company and the potential acquirer could be a mid-tier tech firm or a private equity player.

Industry observers and analyst say NIIT Technologies has witnessed significant ramp up in market and mind share over the last year under its new CEO Sudhir Singh who took over the mantle in January this year.
JM Financial analysts pointed out that NIIT Technologies has added at least eight senior hires from larger Indian/global peers to its leadership team over the last 12 months after the joining of the new CEO. Further, the sales organisation has been restructured along three key verticals —travel, insurance and asset/wealth management — from the earlier geography-based model and the delivery leadership now reports into sales to ensure tighter execution. NIIT Technologies has also set up a dedicated large deals perusal team and is trying to replicate the success of its partnerships with Pegasystems and Appian across additional product/technology firms through a dedicated alliance management team. Effective FY19, NIIT Technologies has also instituted a more rewarding sales incentive scheme and a more differentiated increment structure for the delivery staff to spur performance.

“All these new initiatives may have a positive impact on valuations and help its promoters get a better exit price,’’ said a Mumbai-based merchant banker on condition of anonymity.

To reinstate its focus on digital technologies, the company a few months back set up a centre of excellence (CoE) for digital process transformation in Bangalore.

The CoE is a global delivery centre and focuses on emerging technologies in cognitive business process management areas such as AI, machine learning, NLP (natural language processing) and other disruptive technologies.