It is going to be a bumper year for the initial public offering (IPO) market with over Rs 39,944 crore already raised by 23 companies so far this financial year. 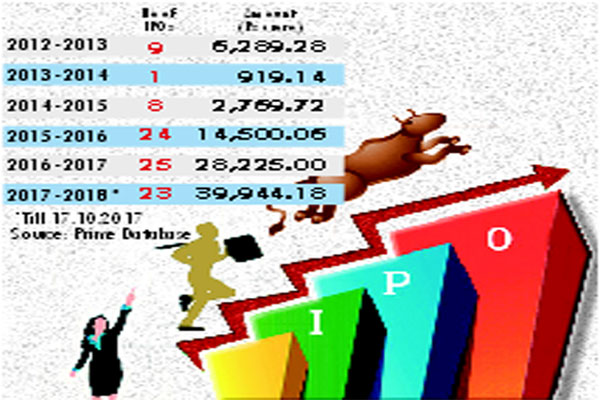 The Centre is planning a major crackdown on shell companies after Diwali when it seeks action taken report (ATR) from the state governments on bogus businesses that have become breeders of black economy.

The move is being seen as the dropping of second bombshell on black money after the note ban announced by prime minister Narendra Modi last November soon after Diwali celebrations had ebbed. "We will be meeting state government officials next week to urge them to attach assets of shell companies that have been struck off from the registry due to their involvement in money-laundering," a senior government official said.

"Because Sikkim is not covered under Companies Act it will not participate. All other states will participate. The meeting is scheduled on Monday," he added. The corporate affairs ministry had earlier cancelled registration of around 2.10 lakh defaulting companies. The finance ministry subsequently directed banks to freeze their accounts tightening the noose around them.

On September 12, the corporate affairs ministry said it had identified 106,000 directors of companies who did not file their financial statements or annual returns for three straight years and hence violated the provisions of the Companies Act, 2013. Soon, their names were made public. The decision now to attach assets of shell companies is set to come as a major blow to them.

"The fight against black money shall be incomplete without breaking the network of shell companies," minister of state for corporate affairs PP Chaudhary said recently.

Company law experts are, however, divided over the legality of the directive to attach shell companies' assets.

The successful completion and listing of SBI Life Insurance's IPO, one of the largest in recent times, demonstrates the strengths of the Indian IPO environment, with continued buoyancy in the equity markets.

Exits record a Y-o-Y increase of 128 per cent by value at $4.7 billion across 65 deals, driven by record exits via IPOs, open market and secondary sale.

The third quarter of 2017 recorded the largest IPO exit ever with Fairfax selling its 12 per cent stake in ICICI Lombard for $558 million.

According to EY’s quarterly PE tracker for the third quarter of 2017 (3Q2017), PE/VC activity in India witnessed a sharp increase across investments, exits and fund raise on the back of some large deals with size in excess of $200 million each.

3Q2017 recorded the highest ever investment in a quarter in the history of the Indian PE/VC industry, surpassing the high recorded in the previous quarter.

Commenting on the PE landscape, Vivek Soni, partner and leader for PE Advisory, EY said, “India is clearly maturing as a PE market with bigger and complex deals becoming more common place. Greater numbers of large deals and buyouts support this thesis and it is clearly visible in the 3Q2017 investment numbers. Improving exit performance over the last couple of years, supported in part by buoyant capital markets, have helped PE funds reaffirm their India thesis and give confidence to their LP’s.

“This will hopefully benefit the nation as India looks to make big investments to spur its growth curve. PE-owned companies are globally known to drive revenue and margin growth leading to a multiplier effect on their eco-systems.

“The good news is that th?ere is massive amount of dry powder available globally and most global funds are now looking at India for investment opportunities. The compulsion of India Inc to deleverage by selling assets is expected to add momentum to the gro?wth of buyout deals in India.”